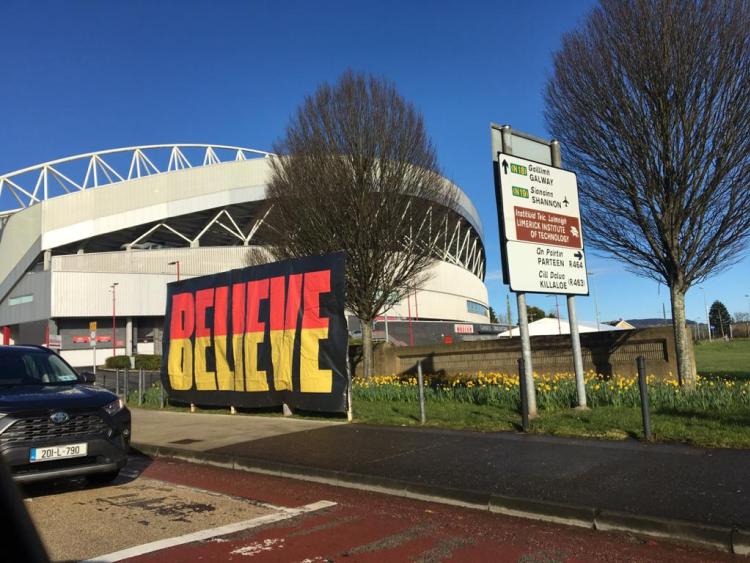 Supporters of St Munchin's College have been accused of “burning” a massive flag of rivals Ardscoil Ris, outside the school on North Circular road before Wednesday's big rugby junior cup semi-final in Thomond Park.

“I put up this massive sign, 20 foot by 10 foot at Hassett's Cross at 6.15am on the morning of the match. It was in the school's (Ardscoil Ris) colours and just said 'Believe',” explained David Crowe, father of Eavan who was playing scrum-half for Ardscoil.

He said that he was told prior to the game that the flag was taken by supporters of St Munchin’s who brought it up outside Ardscoil at around 1pm.

“One of the teachers rang me and told me they brought it up to the school and burnt it there outside using a flare,” said Mr Crowe. He said that they burnt the flag as the Ardscoil team were getting on a bus to go to the ground.

“The Munchin’s supporters destroyed my inspirational sign as a tool to intimidate the players getting onto the bus at Ardscoil Ris as they were going to play in the semi-final,” he added.

Asked if he had reported it to the gardai, he said: “I have not yet, I have the number plates of the car, but I don’t want to ruin the career of some young lad, but what happened was wrong.”

Read also: Limerick man jailed for punching his partner’s mother in the face

Mr Crowe was, at this stage, near the grounds and approached some workmen at Hassett's Cross, and asked them if they had seen anyone take the flag.

“They told me they had, and they pointed to these guys in a car, and I went over to them and I asked them about the flag,” he explained.

He said that he took a photo of the number plate of the car…”then this guy lunged at me and tried to take my phone. They surrounded me,” he said.

“This was totally unacceptable, burning the flag in front of the school,” said Mr Crowe.

“I am very upset about what happened. It has nothing to do with the result, Munchin’s were the better team, but this should not have happened,” said the son of former Limerick City councillor, the late Mick Crowe.

The huge flag cost €300 to put together. “It is nothing about the money, it was the behaviour,” he added.

David Quilter, principal of St Munchin’s College, said that he spoke to the parent who made the complaint about the flag.

“We would not condone in any way what happened and we would consider this a public order offence and something that would need to be dealt with by the gardai,” he told the Limerick Leader.

He said that there was a very good relationship between both schools and they would co-operate with any Garda investigation. “Inside the ground there was a great atmosphere and the game was played in great spirit,” he added.