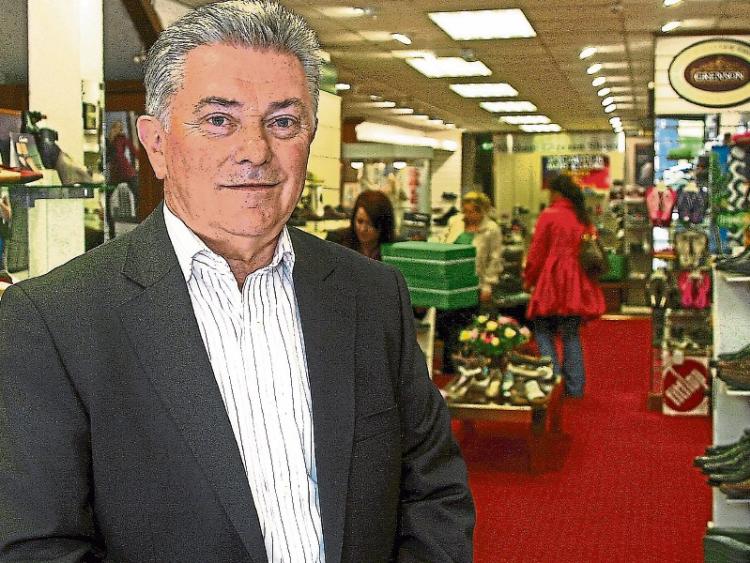 Michael Gleeson: I don't pretend to have all the answers, but with over 50 years in retailing in Limerick City, I know when I see retail dying

TEN years ago, the Limerick Leader published a striking front page headline, calling on the council's officials to "stop the rot" around retail in the centre.

With the perfect storm of an economic meltdown bringing mass job losses, and reduced consumer confidence, it was felt Limerick had reached "rock bottom", and retailers stopped traffic in O'Connell Street to demand action.

In the last decade, the economy has recovered, and the jobs lost have - by and large - been restored.

Yet the issue of falling trade in Limerick city centre remains at large.

Back in 2010, the recession, plus a perceived lack of parking, begging, drug abuse, litter and a high commercial rate were chief among traders concerns.

The enemy of the high street now is the internet and the impact it has had on city centre shopping, the advent of smartphones making online shopping easier than ever.

Dozens of small independent traders have closed in the past two years.

While these often employ only handfuls of people - five here, five there, it's this silent, invisible erosion of jobs and businesses which have caused the decline in Ireland's small business base.

Michael Gleeson, of William Street's Gleeson's Shoes, is one of the city's remaining independent traders. He has identified 20 shops which have gone over the last period of time - and has warned of more to come.

It's for this reason he's issued a rallying cry on the council to organise a meeting of traders to tackle the problem - and quickly.

"Of course we the retailers must play our part too by promoting our businesses better. I don't pretend to have all the answers, but with over 50 years in retailing in Limerick City, I know when I see retail dying, I often wonder do City Council care, or any of our city councillors, as there are no votes in the city centre?"

He urged all the interested bodies to join up, saying: "We are not going to go anywhere without the Limerick Chamber, the Limerick Business Association and the City Council. I am demanding they hold an emergency meeting. Council did nothing for us over the Christmas period to encourage people to come back into town. Our council has shown the least interest of all city council's in terms of retailing," Mr Gleeson said.

The council has responded this week with the appointment of a city centre revitalisation manager, among a suite of measures designed to stop the rot.

And a lot of people will point to the impending development of Project Opera, the University of Limerick's city centre campus and Gardens International as evidence the city has the capacity to respond.

But Mr Gleeson said traders are only looking at the here and now.

"Retailers are only interested in next month and the month after. They have no interest in Project Opera or the Limerick 2030 plan. These things are way down the line. We buy shoes this month to be selling them in three months time," he explained.

While some closures have come about due to economic constraints, some are due to retirement - like Limerick Sports Store this week, and Leonard's in the last few weeks.

In many cases, the owners have nobody willing to take the business on.

Why would a youngster go into a small independent business with the battles of rent, wars with multi-nationals, rates, staff costs and their base constantly eroded by the internet?

That's the view of many commentators/.

Fine Gael's City North councillor Olivia O'Sullivan, who has worked with a wide variety of city businesses, said: "The retail industry is under severe pressure from online competition. Businesses are closing due to retirements, and new ones are not opening. It's very worrying. Someone in their 20s would be used to buying everything online. They probably would look at the traditional business model and realise things are changing. Something has to be done around city retail specifically to try and restore the footfall."

The model of retail has changed forever, with many traders needing to diversify their offering to offer a special experience in store.

One of the companies doing this in Limerick city centre is Lucky Lane, located in an alcove in Catherine Street.

But even its co-owner David Irwin has had to take on a second job to keep the show on the road.

"It's a thin line, nobody's getting rich of this, that's for sure. I think you'd need to have some alternative source of income. If it was just one person running a shop on

their own, you could probably make a living. But we have six part-time staff. We have to rent, insurance, rates, the ESB and wages. It's a long list, and there's not a lot left over after it," he said.

"I think we have unusual stock which isn't available anywhere else. We have an interesting, unique attractive space, filled with odd curated items. There are tonnes of things we could sell, more generic type items, but it would remove the personal touch I think," Dave added.

In a bid to grow Lucky Lane's reputation and visibility, Dave has held arts and jazz evenings on site too.

Down the road in William Street Corbally man Christy Williams is retiring after 53 years' service at Limerick Sports Store. When the current owners bought the shop in 1992, it was on the basis he would be appointed manager.

He argues something you do not get with the multiple stores is a personal touch.

"People are sorry to see us go. With this type of business you get good service and the loyal customers coming back to you. Otherwise, we wouldn't have survived all these years," he said, thanking all his customers, and his GAA clubs who have supported the store over the years.

Putting the retirement sale sign up on Saturday he admitted was an emotional moment.

And given the way traditional retail is going, one feels it's not a stretch to suggest we may never see Christy's like again.