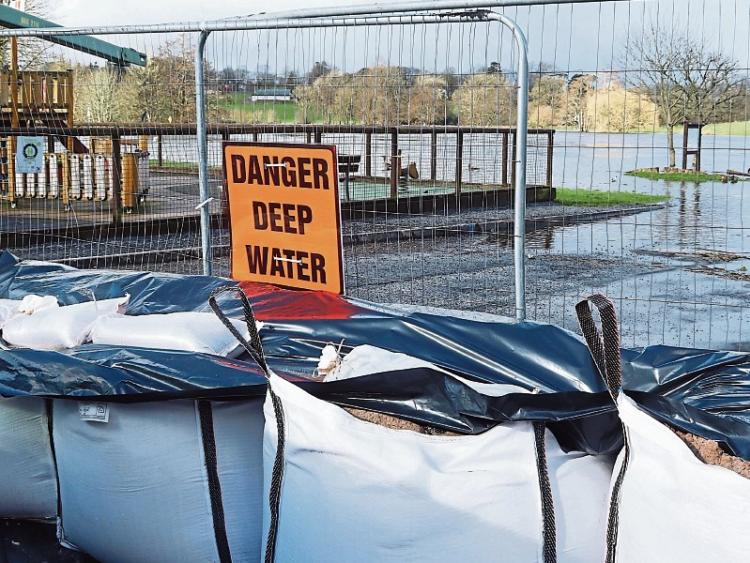 The playground was almost submerged in Castleconnell at the weekend

A COUNCILLOR has praised the “Trojan work” of the army and council workers for their efforts to prevent flooding disaster during Storm Jorge at the weekend.

The severe storm, which brought violent winds and flooding to towns and communities along the west coast, brought strong gales to Limerick for around three hours on Saturday afternoon.

This followed a rare Status Red wind alert in Clare and Galway, which put the two counties in lockdown that afternoon. Meanwhile, the rest of the country was bracing for Status Orange conditions until 7pm that evening.

And while there was significant impact, all eyes were on vulnerable areas in the east of County Limerick and city side of Clare, after a week of flooding devastation.

A number of members of the public had their homes completely cut off due to the floods, and needed the assistance of volunteers from the Civil Defence, a spokesperson for Limerick City and County Council said on Monday.

Green Party councillor Sean Hartigan, who was closely monitoring the flood risk at the weekend, strongly praised the Defence Forces and council workers for preventing another disaster.

He said the water levels were “very high” and it was causing widespread worry for people in “in flood-prone spots” such as Meadowbrook, Mountshannon Road, and Brookhaven in Montpelier.

He said the river in Montpelier and O’Briens Bridge looked “like the sea with the wind creating waves”.

He said the personnel were doing “Trojan work, pumping water off the roads, sand bagging and manning the pumps in terrible weather conditions. They deserve to be properly paid for the work they are doing, if they weren't there over the last week there would have been serious flooding, hopefully they can continue to prevent damage to people’s homes.”

The Red Path in Corbally remains closed until further notice as does the cycleway/ walkway from Irish Estates, through to the Guinness Bridge, and onwards to the University of Limerick.