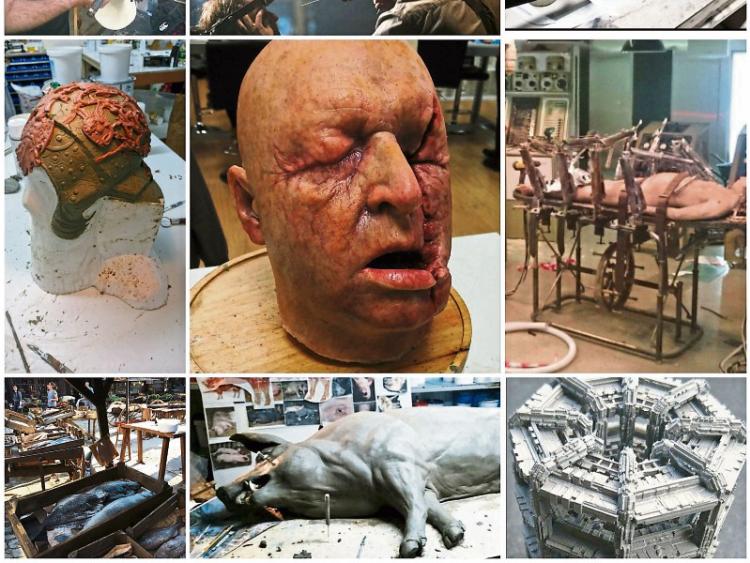 Odyssey Studios, based in Corcanree Business Park on the Dock Road is a prop-making and large sculptural company that caters for the cinema industry.

CEO and sculptor Mark Maher first developed the business after his handmade miniatures were used in The Hobbit films, before moving on to work on films such as Alice in Wonderland and Penny Dreadful to name but a few.

Mark was approached to set up shop here in Limerick in recent years, with the idea already in his head to set up a studio in Wicklow.

“It came down to Troy Studios being based here, that’s the kind of company that’s a support net for a business like ours. We’re currently working on a show being filmed there, we do a lot of bits and pieces there, it’s great.

Set up last year, Mark says the Limerick studio is a “nice unit - it’s definitely not your normal workshop”.

“Our main thing is to really take on as many local people as possible and train them up here,” Mark explains, “we're running courses here now as well during the summer on make-up prosthetics, prop-making, miniatures and stuff like that. It’s very exciting to be able to do that.

“But all this really wouldn't really have happened without Eamon Ryan and Chris Clancy from Limerick Enterprise Office. They really played a pivotal role in our set-up here. If it wasn't for them, I don’t think we’d be here actually.

“They have hugely supported our business, because when you’re setting up a business, especially a prop-making business, it’s huge outgoings really because of the machines that we need.

Mark points out that to be next door to the United Kingdom and anywhere in Europe, and to stand shoulder to shoulder with that competition, the machines that he needed were of the high-end variety and LEO helped with the funding for those machines.

Read also: Limerick on the Up: Meet the company that has put €2m R&D into one of world's pressing questions

“They also help just to set up and to start up here and get advice for Limerick, and the surrounding area as well as who we should be talking to and introductions and stuff like that. They’re brilliant for us.

“Right now we’re setting up a website, and they’ve been a huge help with that financially,” he continued, “it's really good because in a business, it's just money out the door. As quick as it comes in it goes out. And in order for us to be able to stay here, we need the support of Limerick and all around.

“We've been outsourcing a lot of our metalwork and carpentry work here in Limerick.

“We've been using the skills of local people for the business, so we have an input in the area as well. So it's not just all about taking, we give back as much as we can. So that's brilliant.”