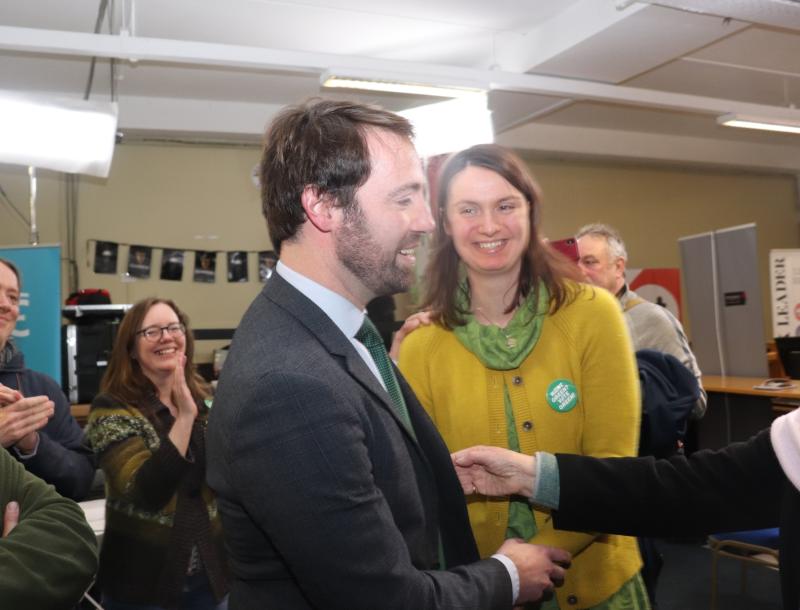 GREEN PARTY’S Brian Leddin rejoiced with what was perhaps the most humble of celebrations from any of the elected candidates in the Limerick constituencies.

There was no singing and he declined the idea of being hosted to the shoulders of his colleagues. He instead smiled, shared a kiss with his girlfriend Ester, and embraced his mother, the former Mayor of Limerick city, Kathleen.

Speaking after his victory, Brian told a Limerick Leader reporter: “I am really really humbled to be elected. The first Green Party TD in Limerick.

“I was elected to the council last May. I couldn’t have seen this coming. It is a fantastic achievement for me, but also the team behind me.”

Leddin, who became Limerick's first elected Green Party Councillor in May 2019, was in a head-to-head clash with fellow north sider Cllr Frankie Daly from the very beginning of the race.

But it was not until the eighth count when Leddin overlapped Cllr Daly, thanks to transfers from the eliminated Senator Maria Byrne this Monday morning.

Before the official announcement, Cllr Frankie Daly approached Leddin with a handshake and a hug, as the day came to a close.

With Labour's Jan O'Sullivan elimination from the race, her transfers gave Leddin an additional 2,351 votes to see him beat his rival with a total of 8,207