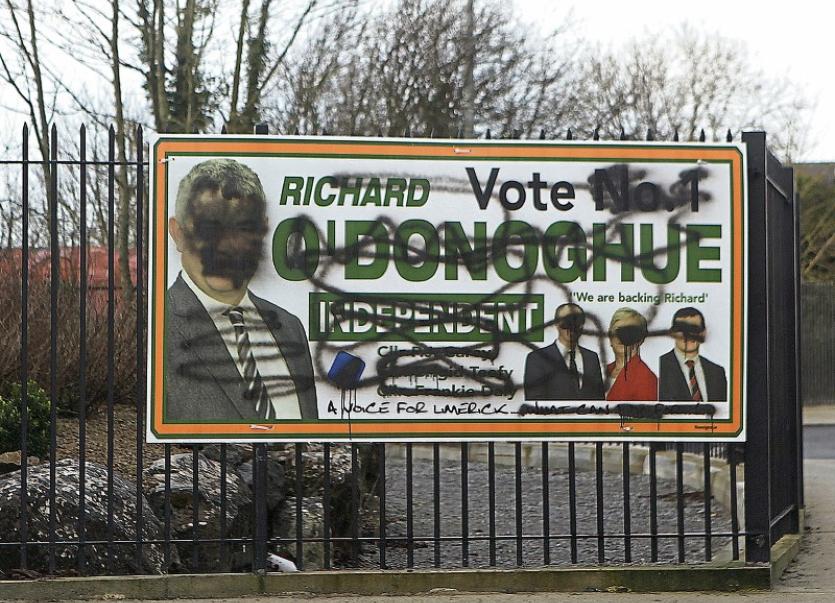 One of the councillor's posters that was thoroughly blacked out in Bruree - Picture: Dave Gaynor

INDEPENDENT candidate Cllr Richard O’Donoghue  has described the defacing of a number of his election posters as a “childish action”.

But if those behind it thought it would affect his election prospects, he said, the incident has backfired on them. He remains undeterred and in fact has been boosted by the incident.

Two large poster boards and a regular poster, located in Bruree,  were effectively “blacked out” over the weekend.

But since then, Cllr O’Donoghue has received over 100 messages of support from the people of Bruree, saying they were disgusted and disappointed at what had taken place.

“I would like to thank the people of Bruree for all the phone calls, texts and message sent to me after the incident,” he said.

“And I would hope that nobody would hold the people of Bruree, or any other village, responsible for a childish action in damaging anybody’s posters or anybody’s property.

“The community came out and said they were disgusted with what was done, that somebody would do anything like that to anybody,” he said.

Cllr O’Donoghue added that he had long roots in Bruree and praised the people of Bruree for their efforts to build up and maintain their community.

“They do fantastic work,” he said. “And for somebody to do a selfish act like defacing the posters doesn’t reflect on the people of Bruree.”

Cllr O’Donoghue added that he was getting a very good response at doors. There is a lot of ground to cover, he continued, and it would take 20 people nine months to visit every one in Limerick County. But he is determined to get to meet as many people as possible.

“I have been visible for the past six years,” he said, adding that people know he has put the work in.