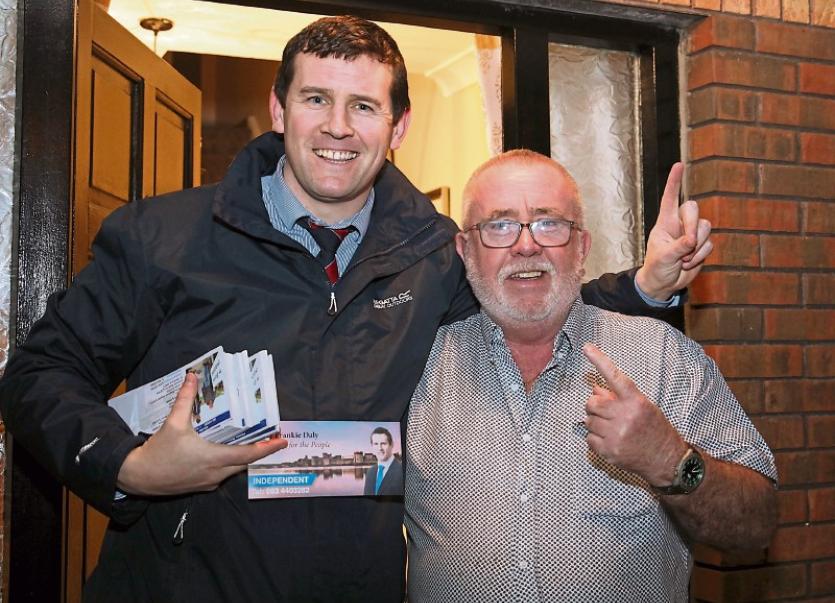 INDEPENDENT councillor Frankie Daly is a man in a hurry.

He admits Taoiseach Leo Varadkar’s decision to call a snap election has caught him on the hop somewhat.

His general election posters are on order, and the leaflets he is distributing come from his local election campaign. The Corbally father-of-two’s manifesto is due out this Friday.

This has not dimmed his enthusiasm to get elected, and in his own words to “make Limerick great again”.

“I’m getting it on the doors. People are open to change, there’s positive vibes there and I’m looking forward to bringing a change to the current system, the current government we have now,” Cllr Daly said as he gets out of his car, which has been resprayed for the campaign, “I’m new, I’m energetic, I know what it’s like. I have a young family, I’ve struggled myself and I see it at the doors.”

In his corner he has the experienced former Limerick East TD, Eddie Wade, who is his cousin and has years of political experience behind him.

Despite his polltopping performance in City North at the local elections, Cllr Daly firmly sees himself as the “underdog” in a crowded field locally.

“I have been an underdog all my life. I didn’t get my first choice secondary school, I was in a school for guys seen as not fitting in. Fortunately through education and sport, I went to St Munchin’s College later. Everyone needs a change,” he said.

We meet Cllr Daly and his supporters – Team Daly – in the car park of Richmond Rugby Club, one of the many sides he has represented in the past.

It’s pitch black due to the fact the floodlights were not switched on.

Indeed, when we get into the lit streets of the neighbouring Rhebogue estate, Cllr Daly runs around at breakneck speed to meet as many people as possible.

Marilyn Lawlor, who is in the middle of making dinner when he calls, said: “I haven’t made my mind up yet. I’m definitely ready for change though. My main thing would be the housing crisis.

“We have not yet fully recovered from the crash, certainly the recovery has not spread to everybody.”

Cyril Murphy greets the youth worker with a hug, and a pledge of a number one vote.

“I’ve known Frankie a long time. He’s honest and genuine. He’s come from a working background like myself I just feel all the other guys are jumping on the gravy train.”

One car speeds through the estate, its driver honking his horn, and shouting “Hon Frankie!”

“Ye’ll definitely get a number one from me and all my family will do the same,” said Vicky Curtin.

Her neighbour James Riordan added: “I’m just sick of the same rinse and repeat politics that goes on in the country. Fine Gael and Fianna Fail are just identical.”

Kenneth Meagher admits he will probably give his first preference vote to perennial polltopper Willie O’Dea.

”In all fairness, when I’ve asked him do to things for me, he was able to do them,” he said, explaining how his benefits were cut off after he was deemed unable to work due to his epilepsy.

Within days, the Fianna Fail TD had him back on the system.

Many observers say Cllr Daly adopts a similar strategy to Mr O’Dea – and the experience of one of his canvassers Gary O’Connor bears this out.

The Thomondgate man said: “Frankie helped my daughter get a house. She had €23,000 saved. She couldn’t get a loan from the bank with her boyfriend, who has a great job. But I spoke to Frankie and within 12 months, she had a house in Thomondgate. He was brilliant to me.”

Gary was delighted when he first met the councillor that he seemed to know him.

“I follow him on Twitter. The day he came to my house, he said to me, Mr O’Connor, you follow me on Twitter. He knew about me, and took time out to recognise who I am. It’s just brilliant,” he added.

Frankie is even trying to get through to the next generation of voters: “In six years time, will you vote for me,” he asks 12-year-old Cameron, who plays for St Patrick’s GAA Club.

“Just knock Maurice Quinlivan off his perch will you,” says Darren Beckett.

Mid-way through the canvass, we meet another of his political rivals, canvassers from the Social Democrats.

“Ye should all be in a Whatsapp group so there’s no overlaps like this,” one canvasser laughed.

If Cllr Daly does miss out, it won’t be for the want of trying.