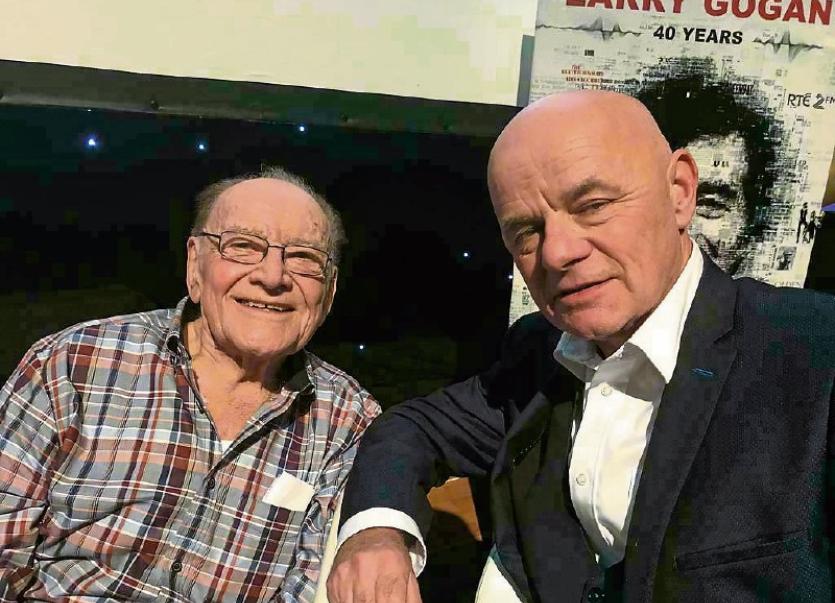 LIMERICK broadcasters Michael McNamara and Will Leahy have paid tribute to the legendary DJ Larry Gogan who died this Tuesday at the age of 81.

Mr McNamara, known in broadcasting circles as Micky Mac, first met Larry Gogan when he joined RTÉ 2FM in May 1979 while Will Leahy worked with him for more than two decades – initially at RTÉ 2FM and more recently at digital station RTÉ Gold.

“He was a wonderful man and he had a very simple approach to broadcasting. On the very first day that I met him, he said come on we’ll have a coffee and he said to me I’m going to give you a couple of tips and he said to me keep it simple – talk to one listener att a time, don’t be talking to them all and get your place names right. He said the greatest insult to people is to name their town or village or incorrectly,” said Mr McNamara who told The Leader that Larry Gogan was a genuine superstar in Ireland during the 1980s and 1990s.

“When we arrived into any town or city in the Roadcaster the place would come to a standstill as everyone knew who he was because he was on national radio and that’s all there was at that time – I don’t think we will see that kind of superstar ever again,” he added.

Read also:  When Adare Manor was nearly sold ‘for a song’ to the State

Will Leahy, who first met Larry Gogan while on a family holiday in the Algarve when he was 15 years old, says he was a consummate professional who was universally liked by everyone who know him.

“In the media industry, there are a lot of serpents and a lot of snakes and there are very few people who you could point to and say there isn’t a bad thing to be said about them but Larry Gogan is the one person who nobody could say a bad thing about,” said Will who presents the Breakfast Show on RTÉ Gold.

“He was a consummate professional who was always there hours before his show was due to be broadcast. Larry was very old school – he would write out everything before he said it and he would rehearse before he said it,” he added.