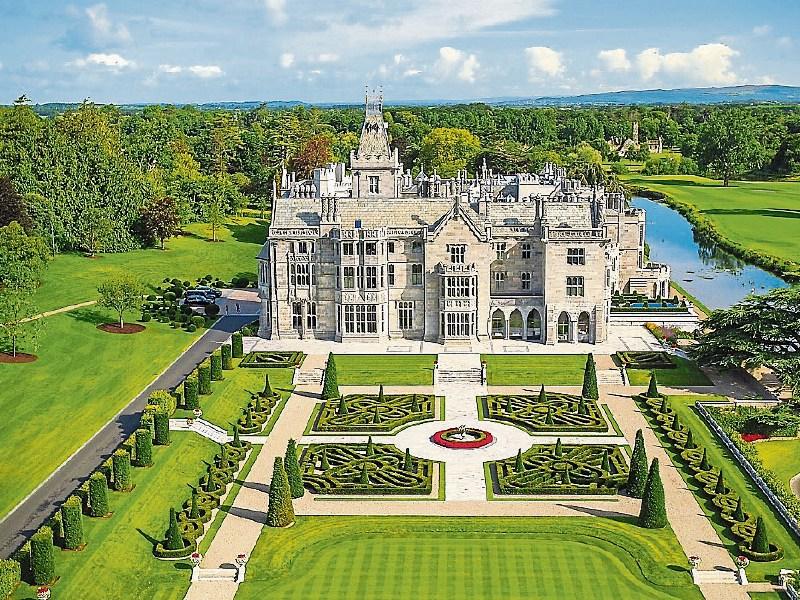 The OPW was not enthusiastic about the acquisition of Adare Manor and suggested it would be best used as a deer park, state papers have revealed

STATE papers released this week reveal that two former ministers for justice, Gerard Collins and Michael Noonan tried to persuade their governments to buy Adare Manor for the State.

But, said Gerard Collins this week, the money wasn’t there to do so .

“I had an idea the property was going to be disposed of,” he recalled and he wrote to then Taoiseach, Charles Haughey in 1980 suggesting that National Lottery money could be used to acquire the manor and 1,000-acre estate as it was going “for a song” at £1m.

“It was a magnificent building, a wonderful location with a very particular history. It was part of our culture,” Mr Collins said, outlining why he considered it a good idea. The building was not “in best repair” at the time, he recalled but he felt a good civic use could be found for it by the Office of Public Works.(OPW)

The then Finance Minister, Michael O’Kennedy supported the idea but after the proposal was examined in depth by the OPW, concluded it could not be justified.

A report in this Monday’s Irish Examiner stated that the OPW said it had no purpose for which Adare Manor could be used and it also had no plans to establish a national park in the Limerick area.

Adare Manor was not among a list of selected properties which contained gardens of outstanding quality, that should be acquired by the State if their future ever came under threat, the OPW report said,

Nevertheless, the OPW acknowledged that Adare Manor was “an attractive estate” with “fine demesne landscapes and good mixed woodland” but was also “nothing particularly out of the ordinary”.

It noted one of the lots containing the 19th century Gothic building and 117 acres of parkland could form an attractive regional park similar to Malahide Castle and Marlay Park in Dublin.

However, it suggested Adare Manor’s best use might be as “a deer park”.

“My whole purpose was that it would be preserved,” Mr Collins said  but added: “Money was very scarce. The government didn’t have any money in the kitty.”

In 1983, the then Justice Minister Michael Noonan, backed by the National Museum, again pushed for the manor to be bought for £1.25m. A memo drafted by the Department of Justice in October 1983 said the loss of Adare Manor to the public would be regrettable “from the point of view of the nation’s heritage”.

But the idea was quashed by then Finance Minister Alan Dukes who said no new factors had emerged to justify changing the OPW decision of 1981.

Adare Manor was later bought by the late Tom Kane and developed as a luxury hotel. It was the backdrop, Gerard Collins recalled, for the crucial first meetings between representatives of the British and Irish governments which paved the way for the Anglo-Irish Agreement.

Mr Collins also recalled his role in the controversial Irish rugby tour to  South Africa in 1989 when the apartheid regime was still in place.

“Restrictions were having some impact on the South African government,” Mr Collins said. But, he added, there was a recognition at the highest levels in South Africa that rugby was extremely important. “We, (the Irish Government) were objecting very strongly to the Irish team showing support because it was being interpreted in South Africa in a political way.”

Afterwards, Mr Collins said, Pik Botha, the South African Foreign Minister, told him the opposition to the tour was “very, very damaging” to them as a government.