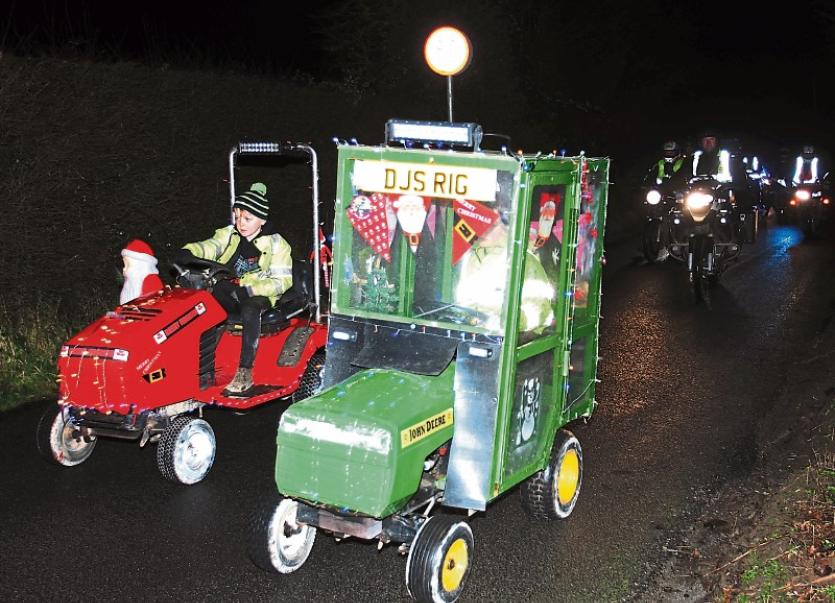 The vehicles in the run came in all makes and sizes

IF YOU were out and about on Friday evening, probably the last thing you expected to see was a convoy of 114 trucks, tractors and vintage cars decked out in Christmas lights.

But if you put together the two great charities - Cliona’s Foundation and TLC4CF - and a fantastic team of volunteers then anything can happen.

Following on from last year’s successful Christmas run members of the Greybridge Vintage Club decided to give it another go. So from 4.30pm tractors and trucks full of Christmas lights and all assortments of Santas and reindeers began to congregate in the yard of Geary’s Farm Machinery.

At 6pm, led out by a fantastic team of volunteer marshals, they hit the road for Bruree, Athlacca, on to Bruff, Croom and Granagh.

“It was a fantastic turnout of participants but what we were even more amazed with was the amount of people who turned out in each of the villages and towns to support the event. It was wonderful to see young and old line the streets to support the spectacle,” said Fiachra Liston, chairman of Greybridge Classic Club.

“We received feedback from last year’s event that those who came out to view the convoy travelling through the towns would have also liked the opportunity to support the charities, so this year we had a team of bucket collectors in each of the villages and we were just amazed at the support people gave us,” he added.

Everyone was in good Christmas spirit but no event - especially one with this number of vehicles being run at night - can happen unless you have a well organised team of volunteers.

Event co-ordinators Pat Storan and Mike Doherty said a huge amount of work goes on in the background.

“We owe thanks to a huge amount of people, to the Geary family and the Rock Bar in Granagh for providing their facilities, the registration team, our bucket collectors, those who worked meticulously on the health and safety plans, a wonderful team of marshals who safely guided the convoy on over 50km of a run.

“It was great to see so many volunteers and members of the Greybridge Club provide so much of their time over the Christmas period for two such great causes,” said Pat and Mike.

Cliona’s Foundation has had a great relationship with Greybridge over the years along with TLC4CF. They have provided relief and support for so many families around our region and the whole of the Greybridge Club says they are delighted to give them their continued support.

Of course, the final job of the night was to announce the winner of this year’s best dressed tractor. The competition had intensified from last year and while many made a valiant effort it was always going to be a tough job to stop Pat Morrissey from winning back to back titles. Congratulations to Pat on a wonderful Christmas spectacle.

Rumour has it he has already started the Christmas lights collection for next year’s event!