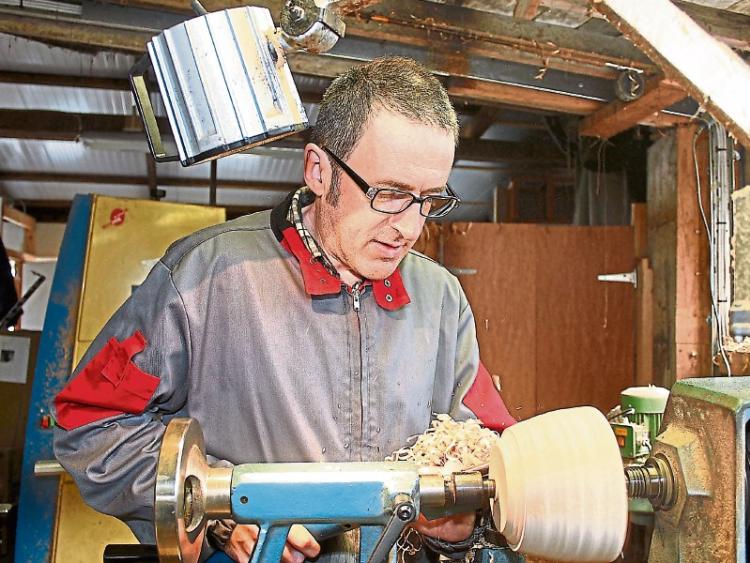 The late Liam pictured in his workshop

A HANDSOME, new book which charts the life’s work of the late artist/craftsman Liam Flynn from Abbeyfeale has been launched at a gathering of friends, family and admirers in Abbeyfeale Library.

When Liam died suddenly in his sleep in April 2017, he had just turned 48 and was at the height of his creative powers. His death left shock-waves in its wake, both in the community in which he lived all his life, and among his friends and admirers in the artistic community at home and abroad who recognised his unique talent.

Operating from his workshop in Convent St, Abbeyfeale, where his father and grandfather before him had plied their craft as joiners, Liam’s work has been exhibited throughout Europe and the USA. And it had found its way into private collections as well as into major collections including the National Museum of Ireland, the Victoria and Albert Museum, The Center for Wood Art (USA) and the Scottish National Museum.

“Internationally Liam was recognised as one of the world’s foremost woodturners,” Clonlara-based artist Samuel Walsh said of Liam. “He was a world leader in woodturning who elevated the craft from the mundane to a recognised art form. To that end his work was often classified in the ‘sculpture’ section of art gallery collections.”

Liam’s great friend and fellow wood-artist Ciarán Forbes of Glenstal said of Liam that he had "an unerring eye for line".

Now, some of that work can be seen and appreciated between the hard covers of “Fluid Forms- Liam Flynn”, which contains essays and tributes as well as 85 colour prints.

The project began to take shape on the second anniversary of Liam’s death, “an opportune time to reflect on his work and life”, Liam’s partner, Mary Leahy explained.  It was a project “conceived and developed through friendship” and carried out by a small team led by Mary, backed up by people who generously contributed their skills as designers and photographers or who wrote essays or tributes.

Publishing Fluid Forms, Mary said, was a  recognition of Liam’s accomplishment in his craft, and a life well lived.

“Liam and I walked through life together for seventeen years,” Mary continued.”I feel the enduring absence every day. Liam’s intelligence and curiosity about life led him to explore so many interests along with craft and art- music, books, politics, history, cycling and fishing. He enriched my world.”

A Dublin launch took place in November at the Oliver Sears Gallery with an exhibition of ten selected works.

And a large crowd gathered in Abbeyfeale last week where Mary spoke along with Liam’s former woodwork teacher, Joe O’Keeffe and Brendan Brosnan of Abbeyfeale Cycling Club. Contributions from Joe and from Liam’s aunt, Yvonne McEnery are among the many tributes in the book.

The book, Fluid Forms, Liam Flynn is available in Ann Lyons shop, Abbeyfeale, in Woulfe’s Bookshop, Listowel, in the National Museum, Collins Barracks or online at painterleahy@gmail.com It is priced at €45 with an additional charge for postage.