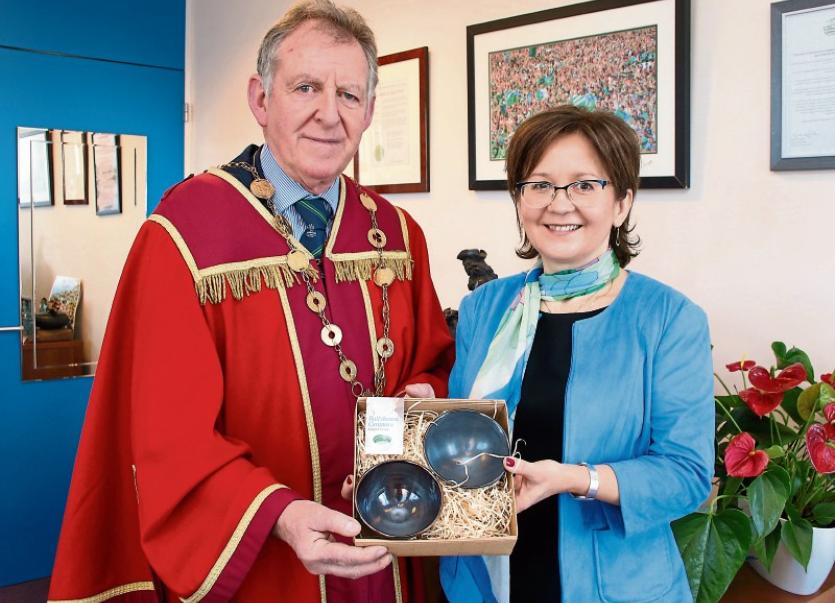 A SPECIAL visit was made to Mayor Michael Sheahan this week as the Ambassador of the Republic of Poland to Ireland paid her first official visit to Limerick which is home to 7,000 of her people.

Her Excellency, Ms Anna Sochanska was appointed to the role in September and said she was “very happy to be in Limerick.”

“As any ambassador, my priority is to strengthen my relations with the country,” Ms Sochanska said, “of course, there’s a huge Polish diaspora here in Ireland which amounts up to 130,000 people.

“There are around 7,000 in Limerick, they are very well integrated and it’s a great example of bilateral cooperation.

“The Polish population here in Limerick speak of an overwhelmingly positive experience, they are active and hard-working people,” she continued, “as in any other country, there are cases of those who did not succeed and have problems and we have to help them with consular assistance of course.

“All-in-all, it’s very positive, with the Polish people working together with their Irish friends and contributing to the Irish economy as well.”

Her Excellency was accompanied on her visit by Grzegorz Saka, Head of Consular Section, as well as the Honorary Consul for Limerick,  Pat O’Sullivan, who said the ambassador has done “fantastic work” in the region.  Mayor Sheahan remarked on the similarities between Poland and Ireland in terms of religion and economic development, and the pair discussed the country's trade and workforce.

Her Excellency was presented with a set of ceramic bowls made in the Ballyhoura region, while Mayor Sheahan received a collection of books on Polish history and culture.

Pat O’Sullivan said: “Her Excellency thoroughly enjoyed her visit to Limerick, and felt truly welcomed to City Hall by the Mayor. Together they examined and discussed ways to develop business cooperation between Limerick city.

“It was a very positive meeting, with hopes to have many more in the future to further strengthen relations.”