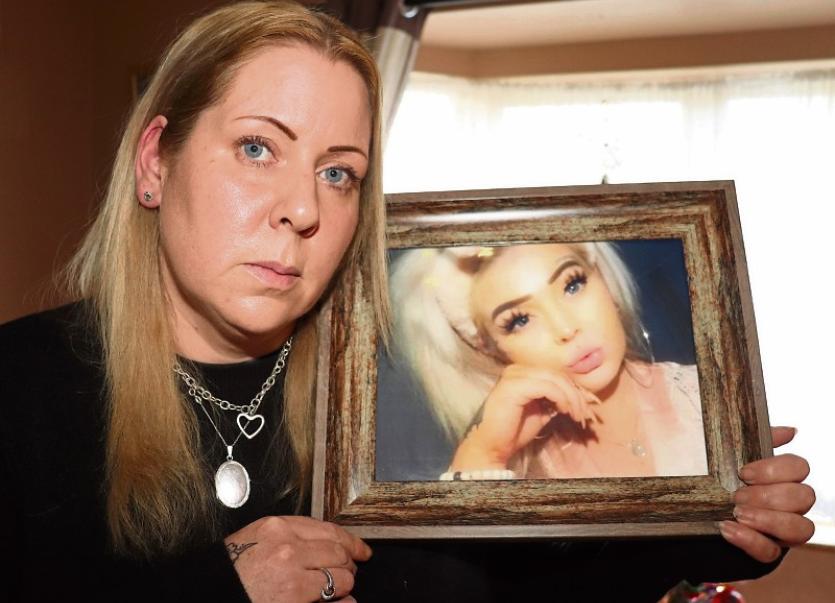 THE HEARTBROKEN mother of a 21-year-old girl who died within hours of being discharged from University Hospital Limerick has spoken out against the hospital and the health minister.

Melanie Sheehan, along with her partner Barry Cleary and their five children, are preparing for their first Christmas in Corbally without their eldest daughter Eve, who died from a suspected cardiac arrest in July.

On July 19, Eve slipped on a step and fell in Limerick city, resulting in the formation of a blood clot that traveled upwards to her heart, causing her death in the early hours of July 21.

Eve went to UHL that night, where she spent a total of 23 hours - 17 of which her family claims was on a trolley in a corridor.

During her stay, the young woman underwent an x-ray and CT scan, the results of which were both inconclusive with doctors canceling a follow-up x-ray before discharging Eve at 8.30pm on July 20.

“Eve said ‘are you sure, because my leg doesn’t feel right, my leg is numb and my toes are numb’,” said Melanie, “the doctors told her she would be fine, and that the swelling would go down.”

Melanie recently spoke to a tabloid newspaper which claimed that the 21-year-old was “convinced” she had a blood clot, which she told UHL staff.

“Eve wasn’t aware she had a clot,” stated Melanie, “she had read the stories about the contraceptive pill she was on and asked her fiancé ‘do you think they (UHL staff) think it’s a clot?’, she thought about it but didn’t tell them she had one - how would she have known?”

Eve had been on the combined hormonal contraceptive pill Marviol for two years, a medication which the manufacturer states “increases your risk of developing a blood clot compared with not using one.”

UHL placed the then-19-year-old Eve on the pill as she experienced a prolonged menstrual bleed after her contraceptive implant, which she had for three years prior, was removed.

UHL was made aware of her family history of blood clots at the time, as her mother had experienced one during pregnancy with Eve’s youngest sibling 12 years ago.

Upon returning home on the evening of July 20, Eve rested her leg, which UHL staff had placed in a tubular grip, before going to bed shortly after 11pm.

Shortly before midnight, Eve’s fiancé found her struggling to stay conscious on the stairs- prompting the family to call emergency services at 11.48pm.

“She woke up from it and was speaking,” said Melanie, “she tried to tell me she was sorry, she didn’t finish her sentence - she had another massive one.”

The preliminary post mortem determined that Eve’s death was caused by an extensive pulmonary embolism, a blockage in one of the pulmonary arteries in the lungs.

The bereaved parents have met with UHL since their daughter’s death, and are awaiting a coroner's report.

“When we met with UHL it was described as a ‘mistake’,” said Melanie, “a mistake to me is getting a latte instead of a cappuccino, or putting in the wrong pin number.

“We were told she was left brain-damaged on our stairs but were also told that if she had been treated at 11.30am on July 20, she would have been fine - something as simple as a drip would have saved her.”

“It’s hard to accept that our daughter would still be here if something so simple was done, it’s a hard pill to swallow.”

Eight days after her death, a bill for €100 was sent to the estate of Eve for her hospital stay, something UHL told the family was also a “mistake”.

Melanie revealed how her daughter was left on a trolley without pillows or blankets and was not seen by any UHL doctor between 11.30am and 8.30pm the day before her death.

Eve was given two doses of paracetamol and one dose of ibuprofen during her stay, but was sent home without a prescription or medical advice apart from rest.

“We came home after she died and I thought she would still be here. She just fell, how could she be dead?”

After her death, Eve’s family tested negative for a blood clotting disorder by a specialist who told them that it “wouldn’t be common” for someone to die so suddenly from a blood clot.

“They told us they would normally be treated and live a normal life,” explained Melanie, “but for some reason the doctors just didn’t pick up on the clot.”

The bereft mother has written to Health Minister Simon Harris about the conditions in UHL, but has yet to receive a reply.

“The conditions out there are appalling for 2019,” she said, “I don’t think the waiting times would be as long in a Red Cross tent in a third world country.

“I told him Eve’s story and I asked him if it was his child would he let his daughter be treated there - I tried to speak to him as a fellow parent.”

Melanie spoke of how her five other children, aged between 12 and 16, are coping with the loss of their eldest sibling.

“They miss her terribly, they talk about her all the time,” she said, “they’re devastated.”

“We lived for our children, we still do,” she added, “we still live for Eve and fight on for her.

“It doesn’t feel right to celebrate Christmas, but we have to for the kids. It’s going to come anyway, we can’t stop it. They’ve been through enough this year.”

“Eve was just a girl getting on with her everyday life, she had become engaged just days before her death. She was our glitter fairy - so full of fun, so kind to everyone.”

A ULHG spokesperson said: “We would like to express our sincere sympathy with Eve’s family on their terrible loss. ULHG is treating this matter with the utmost seriousness.

“We continue to liaise directly with Eve’s family, and an internal investigation process has begun. It would be inappropriate to comment further at this time,” it was added.