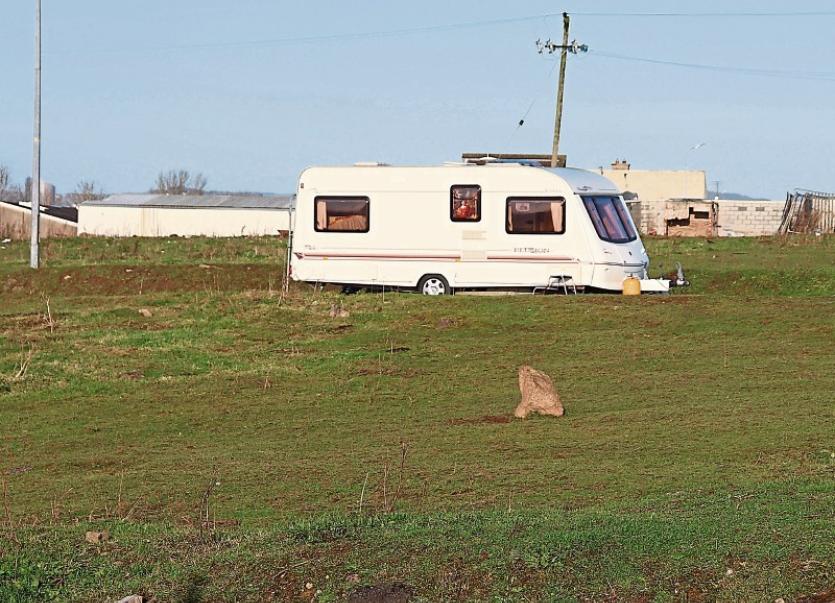 A HEAVILY-pregnant woman who ‘abandoned’ her council home earlier this year has been accused of holding the local authority to ransom by threatening to return to a ‘rat-infested’ caravan which has been parked-up illegally.

Limerick City and County Council has initiated legal proceedings against Samantha Casey-Faulkner over her failure to comply with an enforcement notice requiring her to move the unauthorised caravan.

The caravan, Limerick District Court heard, has been parked up at Toppins Field near the John Carew Link Road at Rathbane for a number of months.

Barrister Liam Carroll said his client, who has an address at Star Court, Carew Park, cannot afford to keep paying for private hotel accommodation and will have to move back to the caravan.

He told Judge Marian O’Leary, Ms Casey-Faulkner has been ‘blacklisted’ by the local authority and that she has been informed by the Housing Action Team that she will not be eligible for any form of housing assistance for twelve months.

He said his client, who is eight months pregnant, has been paying for private hotel accommodation for a number of weeks but that this cannot continue indefinitely and that she intends returning to the caravan which is cold and, she claims, rat-infested.

Solicitor Will Leahy, representing the council, said the defendant was allocated a three-bedroom house in a private estate on the northside of the city in July and that she “abandoned it three weeks later”.

He said houses are at a premium at present and he confirmed Ms Casey-Faulkner will not be eligible for housing assistance for a year in accordance with council policy.

“She chose to go, the house was allocated to somebody else,” he said adding the prosecution before the court was about the unauthorised caravan and not the defendant’s housing needs.

Read also: Woman in Limerick allegedly had face slashed in attack by group of females

While not aware of the specific details of Ms Casey-Faulkner’s case, Mr Leahy said council tenants are allowed to request a transfer if the house they are allocated is not suitable for any reason.

He noted the defendant is not currently living at the unauthorised caravan and he suggested she was holding the local authority to ransom by threatening to return to the caravan to live.

During a heated exchange, Mr Carroll denied this saying his client had been “forced” to leave the council house she was allocated following a number of violent incidents including assaults and incidents of criminal damage.

He accused the council of not engaging with her since and said there was no process for her to progress the matter or to secure assistance.

Seeking an adjournment of the case, he suggested it “might be prudent” for the council to engage with his client in the hope of finding a solution.

“She has nowhere to go, she is about to give birth, a family has to live somewhere,” he said.

Opposing the application, Mr Leahy said Ms Casey-Faulkner’s housing predicament was not relevant and that his primary concern was the unauthorised caravan.

“This caravan is sitting there on the side of the main road,” he said.

Adjourning the matter to early January, Judge O’Leary requested that a written report from the council’s housing department be prepared.