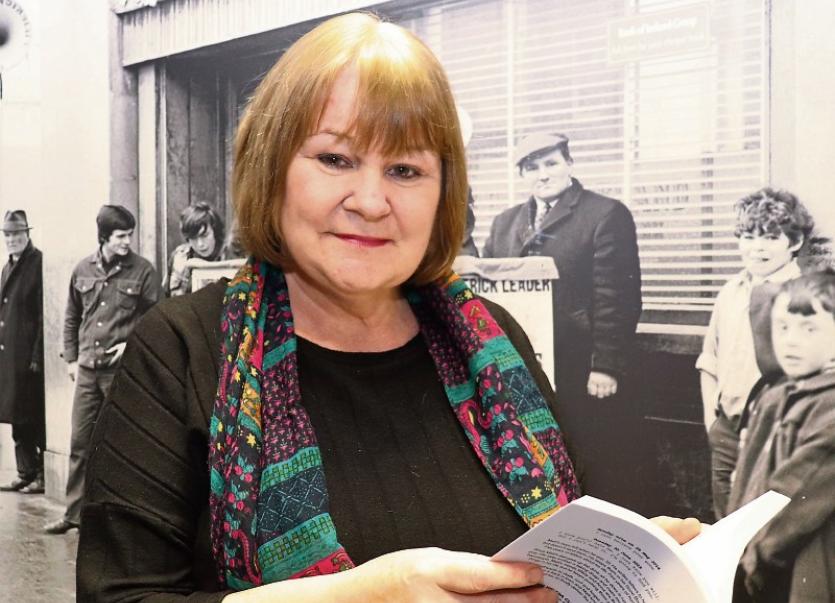 PEOPLE are smart; don't spoon-feed them.” Limerick author Helena Close knows better than anyone about the nuances and intricacies of the modern reader.

Having written or co-written seven novels, The Gone Book is Helena's first foray into the young adult genre.

The Gone Book, due out in April next year, is Helena's "warts and all" depiction of Limerick city and its youth.

Sitting down with The Leader, Helena said: "I didn't want to give the Bord Failte version of Limerick in my book, I wanted to write about the Limerick we all know."

As she aptly said, "It's not Five Go Down To The Sea or Enid Blyton; it's the opposite, and that's where I feel comfortable as a writer.

Helena is a Limerick woman through and through, and was brought up in Lynwood Park (off the Ballysimon Road) and as such, Limerick has featured prominently in her writings.

"The Clever One touched on regeneration, The Cut Of Love is about the end of the Celtic Tiger and the break-up of a marriage in Limerick city," she explained.

"You see this so-called 'literary fiction' and all their books are set in the 1900s or the early 20th century, and I'm thinking to myself 'there's so much to write about now - the world is changing so much around us."

As a mother of four children, Helena is writing about "issues that affect teenagers today like underage drinking, and I pass no apology- it's that realism I've always liked, and makes the characters ring true.

"I think teenagers are marginalised," she said, and there's this attitude of "Oh, young people! And I just want to give them a voice.

"We love to blame teens for everything," she remarked.

"Give them a break. When you take the time to sit down and talk to them, they're very interesting and have a lot to say; we should listen to them.

However, Helena said, "The Gone Book nearly became the Nearly-Gone Book", as life "threw a curveball at her."

"Around Christmas, this time five years ago, my daughter Sadbh, who was 16 at the time, got diagnosed with Hodgkin Lymphoma.

"I was put into a carer's role, and to a certain extent you don't really have any space for writing, and that's the way I like to operate; have some space."

"I was bringing her back from Lahinch for treatment in the summer of 2015, and we were just outside Ennistymon.

“I looked up, and there was a driver coming at me at 80 miles an hour."

Never one to miss a beat, Helena remarked: "It felt like I was in Eastenders.

"I did the cancer storyline, now I'll do the head-on collision. Eastenders, that's me!"

"You're out of one nightmare, then you're into another version."

Helena says she still feels effects from the accident ("I have a brilliant physio who has helped me a lot, she said,) and that due to the nature of her work, it can be difficult from time to time in terms of sitting down for long stretches at a time.”

Adversity hasn't stopped her one bit, however.

Her daughter is now in remission, and once things were OK, Helena said: "I could just feel all the stories and ideas building up inside me; I just had to get it down."

Following the time of caring for her daughter, Helena sought to head back to work, and made a purchase that she regards as "one of the best things she ever did" - buying a mobile home in Spanish Point.

"There's no internet, no housework, no distractions. When you wake up in the morning, it's just you and your work."

Discussing her writing process, Helena says she loves to "attack" a story, a relentless approach of "getting it down."

The Gone Book is currently going through the correction process, and Helena says the relatively static nature of book writing has left her wanting to expand her writing wings.

Helena and Marie Boylan wrote a play called Red Army, a play about four Munster women heading to Paris for the first match of the season.

Helena is a die-hard Munster rugby fan, and was thrilled to be able to write about her other passion.

"I go to matches and you hear these women around you, and you'd think to yourself 'these women are more articulate and have better analysis than some of those on TV."

Helena said there is somewhat of a double standard in the literature scene regarding female writers, but acknowledges there has been "progress" over the last 10 years.

"If I wrote Brooklyn, it would have had a pink cover and been marketed as a romantic novel," she says.

Over the course of the interview, Helena's adoration for the Limerick culture scene shined through, with Blindboy being cited, as well as the Belltable Arts Theatre.

"The Belltable have really injected a cultural life into Limerick city. I love going to the IFI screenings on a Monday night, or the different plays on there, and having the hot desks in there for writing is fantastic."

For now, Helena is lining up a new book, and says "I'm on a streak."

And long may it continue.

The Gone Book will be published early in 2020.