A LIMERICK lady who fell in love with a gorgeous grey-haired Greek on holiday returned to the island as she couldn’t stop thinking about him.
However, the twist in this tail is that it was a cat and now they are living happily ever after near Newcastle West.
Ivonne Kennedy, who lives just outside the town spotted the beautiful tabby kitten while on holiday in the tiny Greek island of Thirasia near Santorini.
Unable to get the cute kitty out of her mind, the kind-hearted cat lover made a quick return to the village she was staying on the remote island to rescue the cat and bring it back to Ireland, a round trip of more than 8,000km.
“He is very sweet, very grateful. He knows we have rescued him. He is aware of it. He has a good appetite and loves to play with our other cats,” Ivonne said, “I just felt like he needed love, he needed to be loved, he needed to have a loving home.”
Ivonne named the cat Jammy, after the owner of an apartment she stayed with in the village of Manolas on the island. Jammy of course also means lucky! 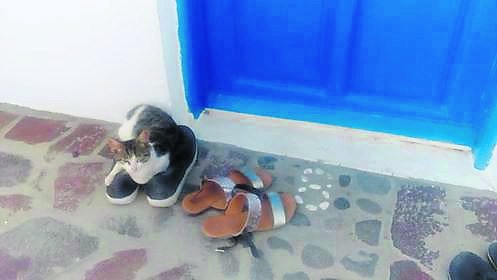 It was when she returned from a hike with her husband Seamus to find the kitten, aged just six months, asleep in his shoes, that she felt she couldn’t live without him.
“That was the moment I just couldn’t go back. I just knew I had to bring him home,” she told the Limerick Leader, “I told him when I left I would come back for him. I felt there was no other way. This cat needs me, and I need him. I just know he loves me as well.”
Although Ivonne, who hails from Germany originally, completed her annual holiday by visiting Budapest and Vienna, she could not stop thinking about the kitty.
So almost immediately on her return home, she set about planning a return visit at short notice – an epic journey which involves a flight of over four hours, before two ferry rides totalling ten hours.
“I had to buy cat food to feed the village cats to make him appear again. But he suddenly appeared and he recognised me. It was so cute. It was like I’d never left the island. He recognised me and followed me back to the accommodation. I had stayed at the same place. And he stuck with me ever since,” Ivonne explained.
After being reunited with Jammy, she took him to a local vet where he was vaccinated before acquiring a pet passport and taking him back to these shores.
Asked what makes Jammy so loveable, Ivonne beamed: “Everything. He’s just the cutest little kitten I have met in my whole life.”
And Jammy should have little problem adapting to the Irish climate, for Ivonne insists the Greek islands get quite cold in winter-time too.
Nevertheless, she added, he is “sheltered and warm”, not going outside.
Jammy joins a crowded clan in Newcastle West, with Ivonne already owning two cats, Mr Lilly and Lulu, one of which was a stray rescued from Limerick Animal Welfare.
She also owns a dog, which is formerly a stay, and was rescued from the side of a road.
Talk about one purr-fect family!