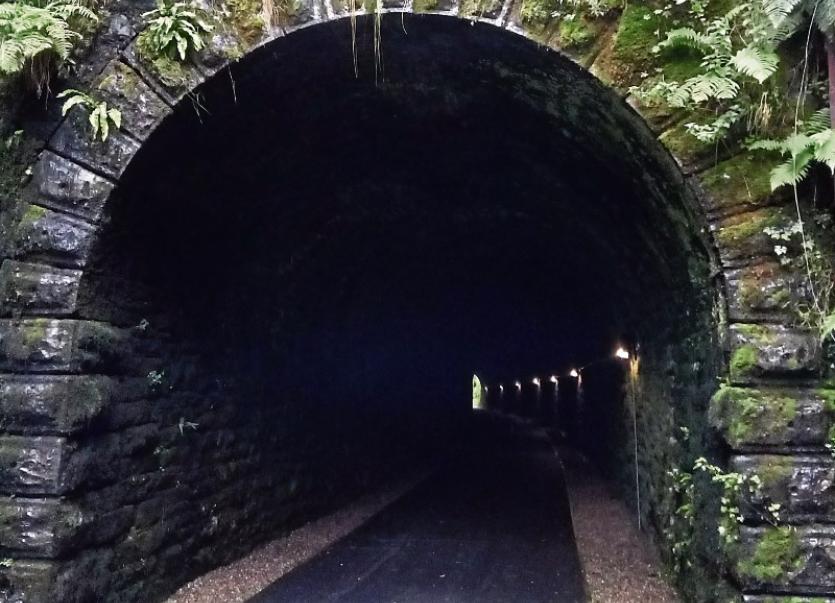 The Barnagh Tunnel on the Great Southern Greenway: Adare-Rathkeale councillors said this week their GMA money has been promised elsewhere

PLANS to resurface the Great Southern Greenway have been dealt a blow after members of the Adare-Rathkeale Municipal District voted not to ringfence a portion of their discretionary funds to carry out the works.

The council executive had asked councilllors in Adare-Rathkeale and in Newcastle West to consider allocating a total of €500,000 over the next five years from the discretionary GMA fund.

At a meeting in Rathkeale on Tuesday, a secret ballot was held with the six councillors leaving the meeting room to cast their votes.

Before the result was announced, the cathaoirleach, Cllr Kevin Sheahan, said he and his colleagues are 100% supportive of the Greenway.

He said their vision is that the greenway will be extended over time and that it will ultimately run from Limerick city to the Kerry border with spurs connecting it to Foynes, Askeaton, Curragh Chase and Adare.

“If the State, for whatever reason, doesn’t adequately fund this and if we have to make a decision at estimates time we will be influenced by the fact that we are supportive of this project. It has great potential for tourism in Limerick – especially if it becomes an all-Limerick greenway. It will be the pride and joy of Limerick,” he said.

Having counted the ballot papers, Caroline Curley, director of service, announced the proposal had been rejected by the members.

“Five nos and one yes which means that members of the district of Adare-Rathkeale are not in favour of using their GMA money to move on the project,” she said.

The resurfacing works will cost in the region of €2.5m and it is unclear if the project will now proceed.

Speaking after the result was announced Cllr Sheahan commented: “GMA monies are not going to be spent by us in any way other than for the benefit of our electorate and our district – that’s what we have decided to do.

“We have decided it’s not going on one particular project – each and every one of us has a list of projects straight after the election, demands have been made on us we have made promises and we have given commitments. The monies, in their entirety, will be spent in this district on the best interests, as we see it , of the people who elected us.”