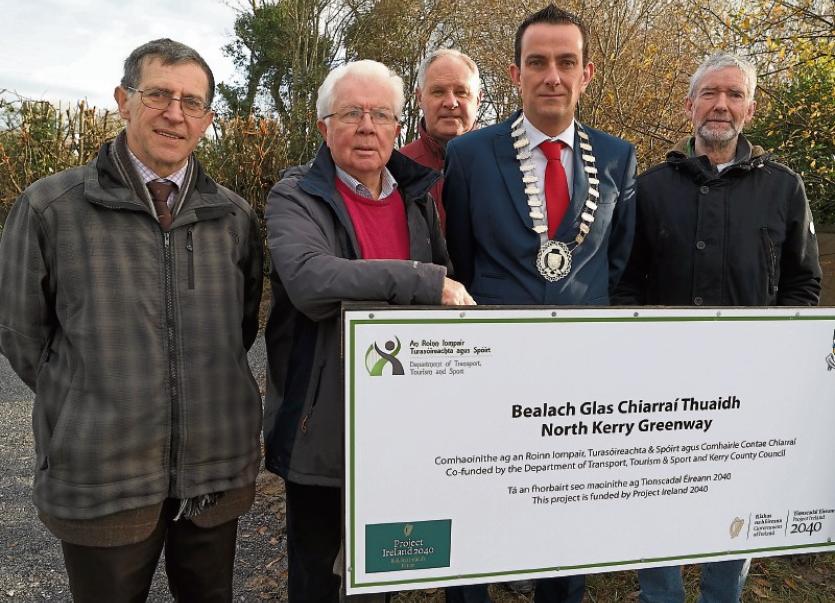 A significant milestone has been passed in the development of the Great Southern Greenway. Last weekend, the sod was turned on the transformation of  the old Great Southern Railway line from Listowel to the Limerick border.

But the aim of connecting the amenity to Limerick's main tourism town is not progressing so well, according to a founder member of the Great Southern Trail Group which pioneered the idea of a greenway along the old railway line.

Liam O’Mahony, welcomed the start of work on the two new extensions. The work, he said, is expected to be completed within 18 months.

But he expressed  disappointment that councillors in the Adare Rathkeale had passed up on the opportunity to host a deputation from the group at their December meeting to address issues including the failure to link up to Adare.

And he did not accept the reasons given for the refusal, which he labelled as “lame-duck excuses”.

“The first excuse is that there is a Part 8, planning application in train. But my understanding is that the extension of the trail from Rathkeale to Ballyagran has been parked until the new motorway is finalised,” he said.

“The other excuse was that they are now going to tender for resurfacing the trail.”

Read also: Keep on truckin’: Limerick Lorry driver John’s final journey is on the back of one

The implication, he argued, was that there was some conflict of interest which prohibited councillors from meeting the Trail Group.

“We are affiliated to the European Greenways. We have our finger on the pulse all over Europe. We are familiar with all the greenways in Ireland and connected with the engineers. We could have been of help in advising them,” Mr O’Mahony said. “We have got things to say about the integrity of the Greenway.”

One of the issues the group wanted to highlight was the poor condition of sections of the greenway within the Adare Rathkeale Municipal District, he  continued. Another issue was to link Adare to the Greenway.

“Everybody is talking about Adare with the Ryder Cup and the bypass,” Mr O’Mahony said. “But they (the council) have failed miserably to connect Adare to the Greenway.”

A plan, approved by the National Trails Office, using country roads to connect Adare to the start of the Greenway at Rathkeale, had been put forward by the group, Mr O’Mahony pointed out. But there had been no signposting of roads to achieve this.

He acknowledged the extension from Rathkeale to Ballingrane, now postponed, would have facilitated that but  did not accept the reasons for the postponement. Once the motorway was in place, just a short stretch would have had to be redone, he said.

The new 10.5km stretch of walking and cycling trail will link Listowel to the existing 40km of Greenway as far as Rathkeale

On the same day, Minister of State at the Department of Transport, Tourism and Sport, Brendan Griffin also turned the sod on the section of old railway line from Tralee to Fenit. Ultimately, the plan is to complete the section of trail between  Tralee and Listowel and extend the trail from Rathkeale into Limerick city and on to Castleconnell, making the Great Southern Greenway the longest greenway in the country.

The two new extensions, at Listowel and Fenit, have been allocated funding of €6.5m with Kerry County Council also contributing to the cost.