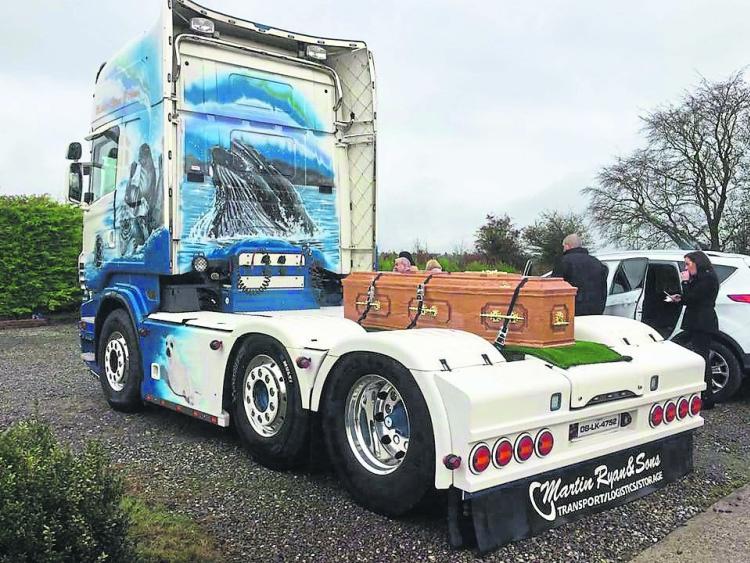 THE late John Dineen made his final delivery last week and, as usual, it was on time.

His family and former employer granted his dying wish that he go to his God on the back of a lorry. At his removal from Ryan's Funeral Home, Ballylanders, John’s coffin was carefully strapped on to the back of a show truck – a Scania Topline 620.

Staff at Martin Ryan & Sons Haulage and Garryspillane GAA gave a guard of honour. The procession to his home in Knocklong was completed by a Volvo FM that John drove for years.

Then on Thursday morning, November 28, the Scania with John’s coffin on board and the Volvo set off for the funeral Mass in Knocklong church.

He would have turned 75 on Sunday. Cancer claimed the life of the well-known lorry driver. John loved being on the road so much that he only stopped working in November, 2018, to look after his wife, Nora. She died from cancer in July.

John was a lorry driver all his life, spending the last 11 years with Martin Ryan & Sons in Cappamore. He knew County Limerick like the back of his hand.

“He had his own built-in sat nav - he didn’t need Google maps. John was loved by everyone, he was very popular,” said daughter-in-law, Teresa. If John was delivering fertilizer he didn’t just know where the farm was, he knew the field the farmer wanted it in and dropped it there.

“He had no intention whatsoever of retiring when he turned 65. All he wanted was to be on the road and that was it. Himself and Martin Ryan had a strong bond, they had a great friendship,” said Teresa. Three weeks before John died, Teresa and husband David went to visit him in St Anthony’s Nursing Home.

“He said, ‘I’d love my last trip to be on a truck but I know that’s not going to happen’. We said, ‘If you want to go in a truck I am sure we can make it happen’.

“That is how it call came about. I was saying it to Martin Ryan and he said they would bring one of the trucks they use for the truck shows and then have the lorry John drove behind it. John also requested that he wanted to be laid out in his Martin Ryan & Sons jacket,” said Teresa.

“Mike took over from John when he stopped to look after his wife. Mike was always ringing John to get directions and John was telling him to ‘mind my truck’. He loved those phone calls because it meant he was still behind the wheel in a way,” said Teresa.

She said everyone was in shock when they saw the coffin up on the back of the lorry but John was certainly smiling down from above. When the coffin left the church in a hearse to go to the crematorium it was followed by the two lorries and they gave a final beep as a salute.

“He got a great send off,” said Teresa, who thanked Martin Ryan and all in the company for making John’s dying wish come true; Mike McCarthy for driving the second lorry and James Ryan, undertaker. On the day of the funeral, Teresa said she got a feeling the coffin was going to fall off the back of the truck.

“I told Martin this because John was done twice for not strapping stuff down. Martin said, ‘I’ll make sure he is strapped down because I’m not getting done the day of his funeral for not strapping him down’. Despite the sadness we had a bit of a laugh and John would have enjoyed it,” said Teresa.

On behalf of Martin Ryan & Sons Haulage, Brendan Ryan said they were delighted to be asked by John’s family to give John the send off he deserved.

“The turnout at the funeral was a testament to the man that John was. He worked with us for many years delivering feed and fertilizer to the farmers in the area. John was a friend, a gentleman and a brilliant worker.

“Even though John finished work he was still working and looking after all in Martin Ryan’s by giving directions to every farm. There was no sat nav needed when John was on the other end off the phone.

“Rest in peace John and I hope you will be still guiding us along the roads to the farmers in the area,” wrote Brendan.