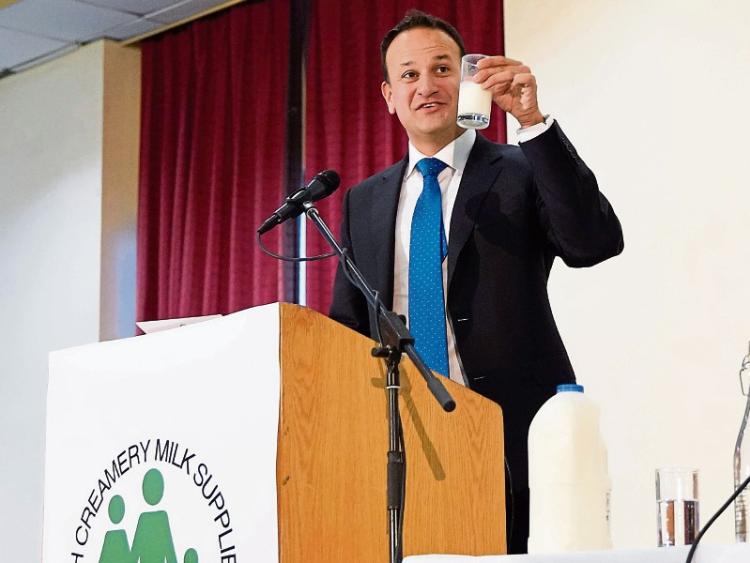 AN Taoiseach, Leo Varadkar, was on a charm offensive at the AGM held in Limerick of the Irish Creamery Milk Suppliers Association (ICMSA).

He toasted the large crowd with a glass of milk. There was no mention of trying to eat less meat as part of his own efforts to reduce his carbon footprint. Indeed, he said climate shaming of farmers should “stop and stop now”. Mr Varadkar said he wanted farmers to be part of the solution “rather than being targeted as part of the problem”.

The ongoing low price farmers are being paid for their cattle “can't be fair”, he declared. Mr Varadkar said the fact that beef prices here are now lower than the EU and UK average needs to be addressed.

“It is only reasonable that the factory gate prices go up in the weeks ahead,” said Mr Varadkar, one of many speakers.

Several experts predicted that the “era of cheap food’ is ending as the present systems that are designed to get massive volumes of high quality food to consumers at artificially low prices must change and that consumers will have to pay what ICMSA president, Pat McCormack, described as “the real price of the food they consume”.

Read also: ‘God willing’ someone will take over lease from monks on Glenstal farm

He said that the cost of the “cheap food” policy introduced and supported by the EU and its EEC forerunner had actually been borne by the farmers, who had been forced by corporate retailers to subsidise the artificially low prices at which the food was sold.

The ICMSA president told over 350 delegates that dairy farmers were getting the same price for milk today as their parents got 30 years ago while every farm input had quadrupled over the same period.

The AGM saw delegates from all over Ireland assemble in the specialist dairy farmers’ Limerick base to hear a superb line-up of speakers and discussions on calf welfare – protecting our social licence and creating value; CAP 2020 and the endemic problems within the beef sector.

Philip Boucher-Hayes was deemed to have delivered a very interesting speech that wholly endorsed the farmers’ complaints that the present system is underpaying them for the food they are producing and his family connections to the well known Boucher-Hayes family in Newcastle West were testament to his connections to rural areas and the role that farming in general – and dairying in particular – plays in Limerick.