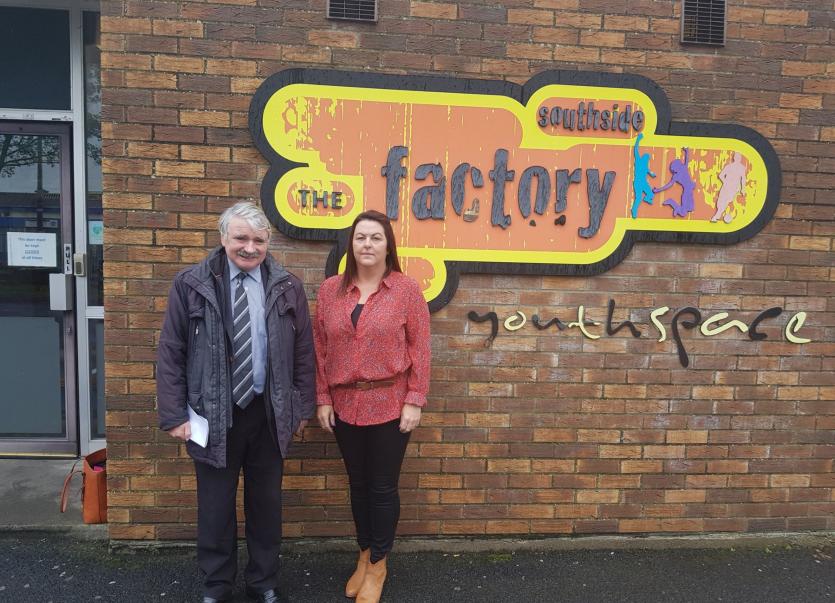 Deputy Willie O'Dea and Cllr Catherine Slattery: pledge secured from council that facility will remain in current space for at least two years

PEOPLE power has saved a “vital” community facility in the southside after there were mounting fears that 49 clubs and organisations were going to be left with no home.

Workers at the Southside Factory in Galvone were told, last month, that the popular facility was to close its doors for good at the end of this month.

It is understood that this was due to Limerick City and County Council’s intentions to sell the building and a reduction in a social integration fund for Limerick Youth Service, which operated the premises.

Read also: Limerick councillors rally around Kilcoyne in wake of attack on home

More than 1,000 people signed petitions to save the facility, and intended to stage a major protest at City Hall on Thursday.

But late last week, Fianna Fail councillor Catherine Slattery secured assurances from council chiefs that the Factory would remain open for at least two years at the current site.

Today I visited The Factory in Galvone.

It is an essential community facility that provides a vital service to numerous groups and is used by so many people every week.

Unfortunately it may close in December. Council officials are proposing to sell the building. pic.twitter.com/wMYZvRyyUJ

She said that Limerick City and County Council officials are allowing the Limerick Youth Service remain at the Galvone site for at least two years until they find an alternative site. One suggested site will be the redevelopment of the Southill area centre which will include extra facilities.

“The Factory will essentially transfer over there and it will be kept in the southside. The workers are happy with that, and I would presume that all the sporting clubs would be because it’s only around the corner.

“I got loads of texts and messages from people on Facebook from young people saying that when they were growing up in Southill and Carew Park, that that was the only place where they could go to keep them off the streets in the evening and have fun, playing sport. When we highlighted that fact to the council, maybe they stopped and thought that it is a very vital place and we better keep it open.”

Limerick City and County Council was contacted for comment.