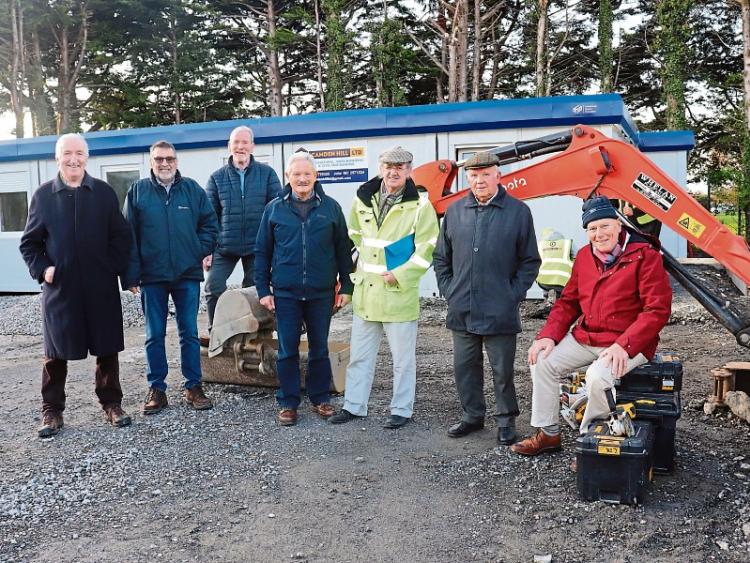 IRELAND’S first purpose-built men’s shed is finally near completion right here in Limerick, just in time for a first-of-its kind programme to be rolled out.

The Dooradoyle Raheen Men’s Shed is in its final stages of completion on St Nessan’s Road - a development entirely brought about by the group’s fundraising efforts.

Upon its completion early next year, the Shed will host a range of activities such as cooking, computers, arts, CPR and exercise classes as part of the Sheds for Life programme set up by Men’s Shed Association.

“It is almost five years since the men in Dooradoyle and Raheen saw the need for a shed in their area,” explained chairman Séan Dalton.

“The area is highly populated but has a distinct lack of community facilities - there is no designated community centre in the area.”

Almost all of the 400 Men’s Sheds in the country are converted buildings and many have been donated, but despite an extensive search no suitable buildings were available in the area - so the men simply took matters into their own hands.

“Limerick City and County Council donated €10,000 to our project but without a building, we estimated that our costs would be around €130,000,” Seán added.

Three years, four table quizzes, a few golf classics, plenty of bag packing and coffee mornings later, the group have enough raised for their very own custom shed - with some help from small grants and corporate funding along the way.

“We are most grateful to the local businesses that have sponsored our project; we plan to erect a sponsor board on our shed,” said Sean.

“We are also thankful to the local community who supported our events for the last few years and also wish to thank Limerick Council and our local councillors for the continued support.”

Séan says the new facility will allow them to branch out with activities, many of which have proved a “huge success” in pilot areas across Limerick.

“It’s great,” said Séan, “it gives more structure to what exactly goes on in the Men’s Sheds.”

“Anything can go on in a men’s shed, from art and music to even yoga and pilates, there’s been a very positive uptake and response.

“There’s an old saying that goes ‘women talk better face to face, men talk better shoulder to shoulder’. Men chat away when they’re working together, but it can be intimidating to walk into a group to talk,” explained Séan.

“These kinds of initiatives are hugely important, isolation is a massive issue amongst men. One of our guys is a house husband with three young kids, he used to not see anyone in the day. Now he comes along to us and it’s great for his confidence, it gets him out of the house.

“It’s generally associated with retired men, and truth be told, we mostly are,” Séan chuckled, “but we have a lot of women contacting us about getting their father or brother involved with us.

“It’s heartwarming to see,” added Séan, “when this all started four or five years ago I’d mention it to people and they would say ‘what is that?’ and ‘why do we need these things sure men have sheds’, but suddenly it grew and people expressed interest in joining and it spread on social media. It was a movement in itself.”

There are now over 20 Men’s Sheds in Limerick, the highest of any county in Ireland. The following sheds are participating in the Sheds For Life programme: Doon, Mulcair, St Mary’s, St Patrick’s, Caherdavin, Croom, Adare Galbally, Newcastlewest and Glin and Abbeyfeale.