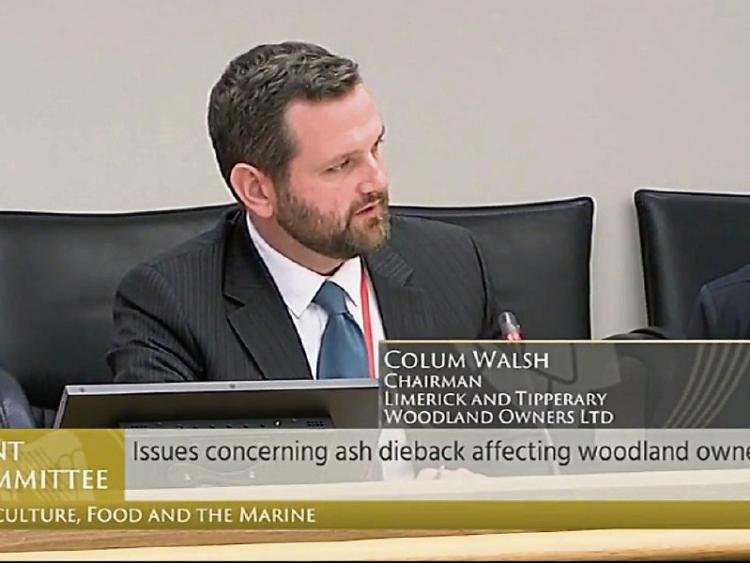 LTWO chairman Colum Walsh, from Cappamore, addressing the agricultural committee in the Oireachtas

The Cappamore man said the current crisis in forestry has been in train for the last seven years.

“As another year slips by forest owners who planted ash in good faith have been left side-lined by the minister and his state department, the Forest Service, who will not reach their 8,000ha target in the coming years if this issue amongst others isn’t addressed in the immediate future.

He said the Forest Service is currently putting in place a scheme of thinning and under planting scheme which does “not compensate the owner for the loss of income, time, and value to their plantations”.

“The only mistake ash forest owners have made to date is to enter into a contract with the Forest Service to plant their land with ash, which the Forest Service approved and grant aided the importation, planting of these saplings into the island of Ireland, paying no consideration to plant health and phyto biosecurity,” said Colum, who addressed the agricultural committee in the Oireachtas in July.

He told TDs ash growers have lost up to €800m from an unstoppable fungal disease.

“The disease has wiped out ash plantations across Europe beginning in Poland fourteen years ago. Due to increased interest in the planting of hardwoods under the old Afforestation Grant and Premia Scheme, ash plants were sourced from mainland Europe, the Forest Service approved these plants for use with no regard to the obvious threat to biosecurity in this country.

“The Forest Service had reacted with a reconstitution scheme that forced owners to clear and replant or all premia would be stopped. After over €4m was wasted on a failed programme the scheme was halted. The Government invited submissions but LTWO are still awaiting a response from their submission over a year later,” said Colum.

He added that the scheme didn't cover loss of earnings and that these farmers had no responsibility for the importation of this known disease but have ended up bearing the brunt of responsibility for the importation of this infection through financial loss, mental distress, the possibility of a non-viable forest and devalued land.

“As a whole ash dieback was an agricultural, heritage, national sport, rural and climate change issue, that to date has not been addressed,” concluded Colum.