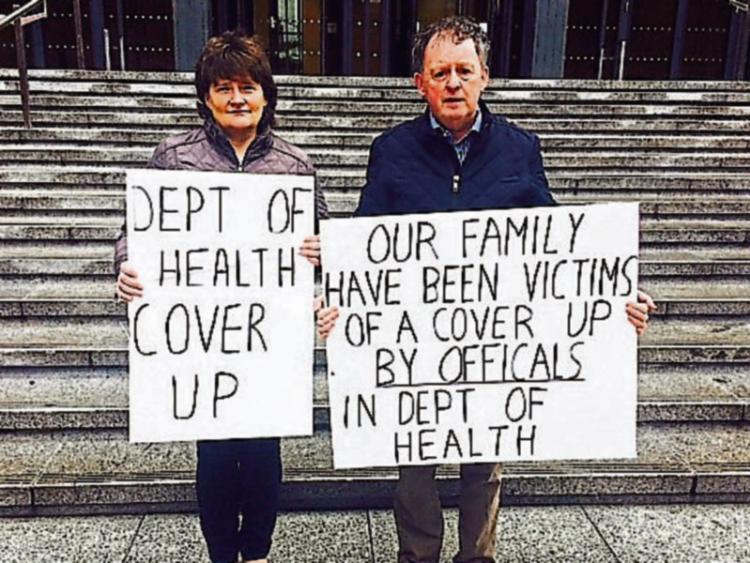 Pat and Nuala Geoghegan protesting outside the Dept of Health

THERE has been no monitoring of sulphur dioxide levels in the air along the Shannon estuary for at least five months because the monitor has been out of operation.

But the Limerick Leader has been unable to ascertain when the monitor, located on a farm near Askeaton, will be back in action.

According to the Environmental Protection Agency’s own website, the automatic monitor has been “non-operational” as far back as June 21.

“The EPA is working to restore this data feed as soon as possible,” the Limerick Leader was told last month. The EPA had carried out a health and safety assessment along with an ongoing review of the monitoring location at Askeaton, the EPA spokesperson said.

“Pending the outcome of the review, the EPA has not reinstalled the sulphur dioxide monitor,” she added.

The monitor is “located on raised ground on a farm near Askeaton and is downwind of the major sulphur dioxide sources in the Shannon estuary”, the EPA’s own site says.

Meanwhile however, the Cappagh Farmers Support Group has written to Health Minister Simon Harris , requesting that he as the person responsible for health, should make available a full and itemised list of what is contained in emissions from Aughinish Alumina.

The letter, signed by Pat Geoghegan, claims that since the government “secured the lifting of the sanctions” against the company earlier this year, Aughinish has moved into “higher production with associated emissions”.

Read also: Meet the Limerick students making the case for climate action in the Dail

This surge in production, Mr Geoghegan alleges, is having a negative impact on human health. “Our group are requesting of you as Minister for Health, to make public what exactly the production levels at the Aughinish Plant were prior to the sanctions being lifted and what they were monthly since , to their present status as of today?” Mr Geoghegan says in the letter.

Separately, Mr Geoghegan has raised concerns that the protocol used to investigate animal and human health during the Askeaton investigations over 25 years ago, is still the same protocol that would be used in the event of any investigation arising from the proposed incineration plant at Mungret.

That protocol failed Mr Geoghegan, his family and other families, he said.

“Our concern is this protocol will not protect the families in Limerick, Clare and surrounding areas. This protocol protects the polluter.” he said.

Willie O’Dea TD  confirmed that he is looking into the issue of the protocol and how it might affect Limerick in the future.