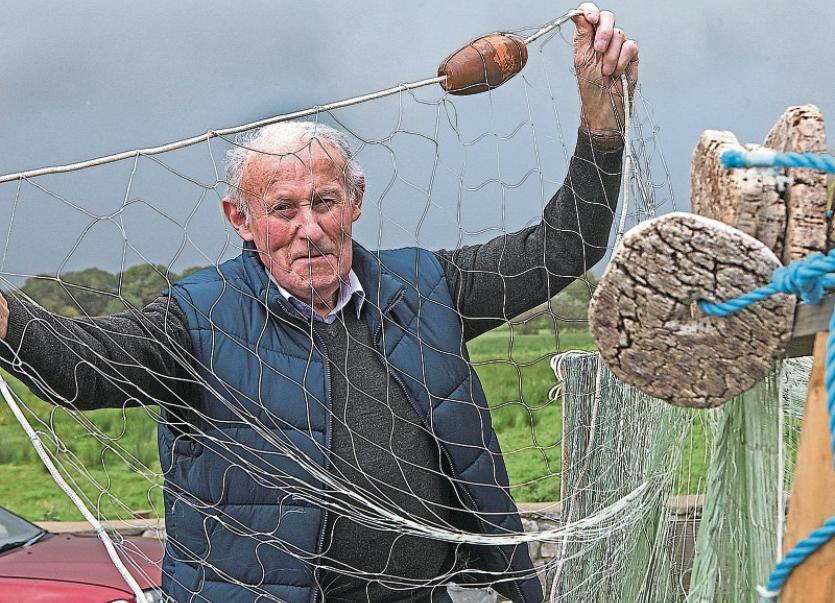 Peter Byrnes is the last of generations of men who fished the Shannon from their quiet corner of the county - Picture: Dave Gaynor

FROM his hilltop home, Peter Brynes has a bird’s eye view of the river that for so many years nurtured a thriving fishing community and gave him, and generations before him, their livelihood.

This is Newtown, Clarina, on the shores of the Shannon, where fishing and farming went hand in hand for eight generations of Peter’s family, before it all changed.

“The fish were the life-blood of the community,” he said, with vivid recall of those past times where Newtown was a place apart. “In my young days, there could be 20 or 30 boats in this area, employing 100 or 150 people.”

The boats put out from two locations on the river, he went on, the Orchard and Sandy, and the flat-bottomed craft or gandelows were pushed and pulled across the mud because there were no slip-ways or piers.

That was a time when salmon was king.

“The fishing season started on the first of February. and after they went fishing white fish, sole, plaice and flounders.” It was all drift net fishing then, where the boat and its net would drift ten or 12 miles with the tide before coming back in with it again and the salmon would swim into the drifting net.

It all depended on the season, and on the spawning. The fish were sold locally to a fish buyer. “The last one here was Jimmy Byrnes.” The fish were weighed, put on ice and then brought to the train in Limerick from where they would make the journey to Billingsgate in London. “They would be in prime condition,” Peter recalled.

Like any market, supply and demand determined the price. “You got as much for one, as for four or five if there was a big supply,” Peter said before adding: “A good season would see you through to the next.”

Read also: County Limerick town set to Bounce on to the big screen in short film

The white fish were sold door to door and then, the fishing over, the men would cut and save hay and sell it in the city.

“That tided them over to the next season.”

Peter was 16 when he first went fishing, taking his father’s place in a boat with Jack Roche and Peter Rahilly.

“I knew nothing,” he recalls now with a chuckle. “I would have known if I had listened.”

But he learned quickly and his mentors were strict. “The job we were at was dangerous. The danger was on the water.”

“When I was younger I was afraid. Then when I got to know the river, I had immense respect for the water.”

“I was not really ever in danger,” Peter continued. He had, he reckoned, picked up enough along the way to know how to read the signs. “You needed a breeze to stir up the fish. If you had a flat calm, you caught nothing,” he said. “A fog is the worst type of weather. It is quite dangerous. You would go ashore.”

It wasn’t always easy to head back out, the day after a soaking or after weeks of catching little or nothing. “But you hadn’t any other option.”

After five or six years, Peter got a boat of his own. “I inherited it,” he said. Then some years after, Paddy O’Brien made one for him. “It was a 24-foot boat. They were all 24 feet. It could take three men. Until we became motorised you needed three men. Then two would do and the engine would do the donkey work.”

But fishing was always a bit hit and miss and other work was often required.

As a young man of 20, Peter set out, like so many other of his compatriots, for England. He was in Birmingham for a while and there he met and married Ann Tighe from Co Meath, a marriage that lasted 66 years until Ann’s death in 2016.

By 1951, however, Peter was back at the fishing again, supplemented by a job at Irish Cement where he was involved in an accident which nearly killed him.

Six weeks later, and with a dent in his skull, he was back on the job and stayed until 1955 when he was let go. For some years after that, he was over and back to England, returning always for the fishing. “I kept it up until there was work enough here to stay at home.”

Then, in the mid-1960s, he built his first boat himself. “The man who helped me build the boat was Michael Macky O’Neill. It was white Archangel deal,” he explained. “There is no Archangel deal now. They cut down all the forests.”

But he had the pattern for the boat in his head and took measurements from existing boats and it was sound. “Necessity,” Peter pointed out, “is the mother of invention.”

Time, however, was beginning to run out for the fishermen of Newtown and Coonagh.

Up to 1934, the salmon licence for driftnet men was unlimited, Peter explained. “You could catch as many as you could.” But after that, the number of licences for the Number 8 district, from Limerick to Ballybunion, was restricted to 70 and 25 of these were for draft net men.

Then in 2006, faced with falling stocks, many of the licences were bought out and a temporary ban put in place. “Most of the people took compensation. I held on, hoping things would come back. We didn’t know. We couldn’t go out.”

Pollution is a big part of the reason stocks haven’t recovered, Peter is convinced. “If the water isn’t clean and pure they won’t spawn,” he pointed out. And the proliferation of predators such as cormorants, seals and otter. “There was a price on predators when there was an abundance of fish. You could get five shillings for a cormorant. They gobble their own weight in fish every day.” But now they are protected.

“I would protect the spawning season. If you haven’t fish, you are going nowhere,” Peter said, outlining his view of what needs to be done. “I would control the predators by one means or another. If it goes unchecked the predators will have nothing to eat. They will die of the lack of fish.”

But, he added: “The powers that be don’t want to see it that way.”

Peter took part in a protest flotilla in 2011, along with some boats from Coonagh. They didn’t seize his net, although those of other boats were seized.

But Peter ended in court and with a fine. He hasn’t fished since.

“It does make me sad. It is a way of life that is gone now.”