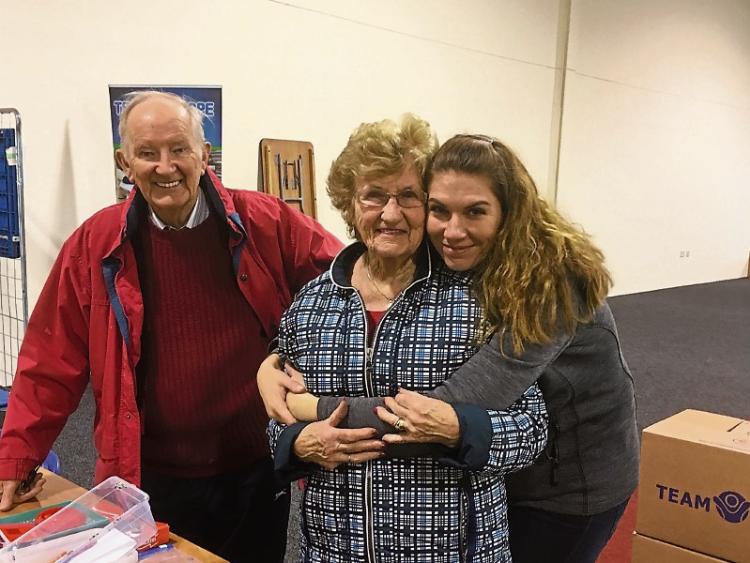 Norah Collins, from Doon, said on February 14 she and all the team received the devastating news that their beloved Joan had passed away earlier that day.

“Joan and her husband Ron have been part of the Christmas Shoebox Appeal since before I got involved back in 2001. We just clicked and have been great friends since then and would meet them every couple of weeks in the Crescent for a coffee and they became part of our family.

“Joan was a character and one of the most stylish ladies I knew and Ron treated her like a queen. They celebrated their 61st wedding anniversary last December and even though they were in their mid 80s it didn’t slow them down.  To me the Christmas Shoebox Appeal will never be the same and I will miss Joan’s presence and wit but the show must go on and this year it will be done in her memory. May Joan rest in everlasting Peace,” said Norah.

They only opened their depot at 4 Park Point, Dublin Road, beside Aldi, on Monday. Norah thanks University of Limerick for giving them the space again and Cater Hire for furniture. Over 2,000 shoeboxes have already been handed in. Opening times will be from 10am to 9pm daily and closed at the weekend. People wishing to donate have until Thursday, November 21 when the truck leaves.

“If you would like to get involved this year grab a shoebox, cover it with wrapping paper and fill it with age appropriate gifts to include the four Ws –  wash, write, wear and wow. An item of wash could include toothpaste, toothbrush, soap, facecloth, hairbrush or comb. Wear may be a hat, scarf, gloves, T-shirt, underwear or socks.  Write – a copy book, colouring book, notebook etc with pens and pencils and colouring pens, crayons or markers and finally the wow factor would be a cuddly toy, skipping rope, tennis ball, doll, toy truck etc. Donations of any of these items would be greatly appreciated as we are always in need so if you can’t fill a box you can donate an item,” said Norah.

Age groups are from two to four, five to nine and 10 to 14 and if you can’t get your hands on a shoebox, Dealz have a flatpack box specially designed by Team Hope, available in the William Street and Bedford Row stores.

Norah thanks each and every volunteers and says more are most welcome to help sort and check each box. She makes special mention of Daniela Seiner, from Austria, who was a guest at Norah’s home in Doon last year through Airbnb.

“When she arrived I was in the middle of filling my boxes. Daniela was all excited when she saw what I was doing as she had filled boxes when she was in school but hadn’t done so in years.

“She helped me fill mine and decided to give up the last few days of her holiday and come in to the depot and help out.

“She was amazing and so enthusiastic and got on great with everyone. She was so impressed with what we were doing that she gave up her holidays this year and came back to volunteer for the two weeks of the campaign. People’s generosity never ceases to amaze me and while we gained a great volunteer in Daniela, we sadly lost one of our founding members in Joan,” said Norah.