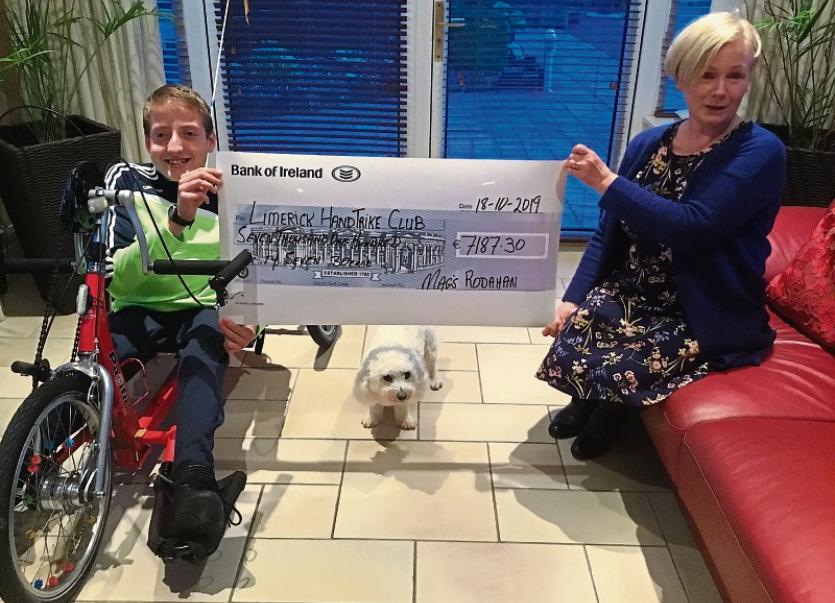 WHEN 15-year-old Sean Byrnes, from Pallasgreen, started fundraising for a Limerick hand trike club in May he never thought he would reach his destination by October.

Sean, born with spina bifida and hydrocephalus, has no use of his lower limbs and uses a wheelchair. However, he completed his fifth Regeneron Great Limerick Run 10k on a hand trike with mum, Fiona, this year. Proud dad, John, said his son’s campaign started on May 1 to raise €10,000 to purchase five hand trikes.

“Sean wants to start Limerick’s first hand trike club to inspire and encourage others with disabilities and challenges to be active, to try something new and have fun,” said John. Sean has been honoured by the gardai with a national youth award, by former Mayor James Collins and the Leader with a Limerick Person of the Month presentation.

One of many to be blown away by Sean’s attitude and plan was Mags Rodahan from nearby Dromkeen.

“Mags started training back in June for three months. She cycled in the mornings, evenings and weekends in all weathers to prepare for the 88km cycle challenge from Dromkeen to her native place in Crosspatrick in County Kilkenny. This would normally be for the more seasoned professional cyclist,” said John.

However, it was no bother to the mum-of-three. The Byrnes travelled to Crosspatrick and Sean covered the last few miles with Mags on his hand trike.

“The support and generosity from the community was incredible. They organised a coffee morning and raised €1,000. The welcome Mags, her nieces and nephew and Sean received when they came into the village was overwhelming and heartfelt,” said John.

Support in Limerick hasn’t been found wanting either and they even got backing in London.

Funds raised from Mags’ cycle, from friends and neighbours in Cloverfield, Dromkeen, Pallasgreen, Kilteely and Crosspatrick added together came to €7,187.30.

“Our target of €10,000 has been exceeded. We have €11,500 so now phase two is on the way to purchase the hand trikes. This is a very exciting time and ahead of schedule,” said John. it is all made possible by his son Sean and his motto all things are possible.