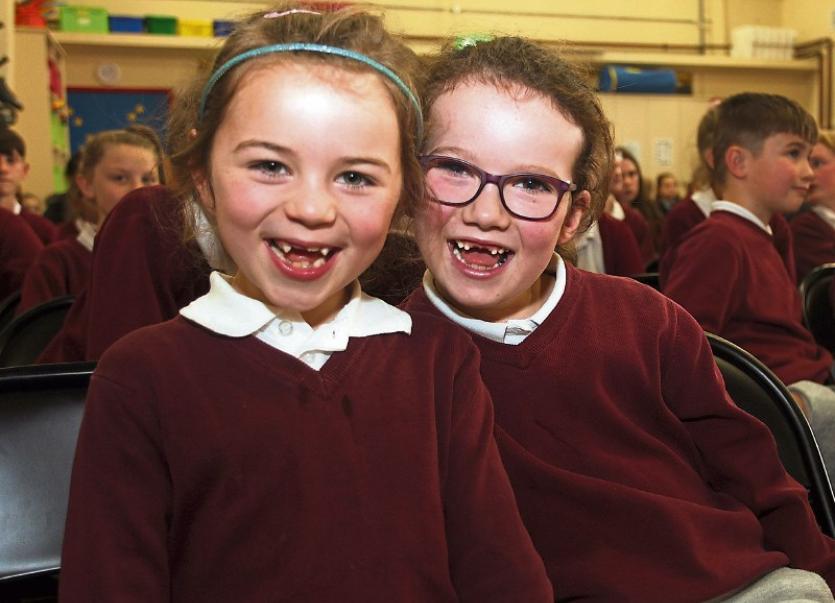 IT was high octane stuff and the crowded school hall of St Anne’s NS in Rathkeale was buzzing.

Throughout Tuesday, hundreds of children from schools all over West Limerick had gathered in Rathkeale for National Science where the emphasis was on physics.

But this was physics with a fun twist and, at times, an element of the pantomime.

“If I press this balloon on to the thumbthacks, will it burst? “ was the question from facilitator Angela McGlynn.

As it happened, the balloon didn’t burst and all because the force was “spread out and shared.”

Earlier, one intrepid schoolgirl had sat on the mat of thumbtacks and agreed it didn’t really hurt.

Angela, who works with Anyone4Science, a company which specialises in science workshops and science camps at primary level, had a lot of other “experiments” to show the crowded hall, all demonstrating some aspect of science: compressed force, tensile force, gravity.

Whirling a bucket of water, the pupils scattered and squealed,  sure they were going to be spattered. But centrifugal force meant they stayed fine and dry, and had a great party trick in time for Christmas.

“The enthusiasm is just amazing,” Angela said with delight. “They are so excited.”

National Science Week has been happening for some years at St Anne’s, principal Máiréad O’Donnell explained, and had become a kind of hub for the county.

This year, pupils from infants to sixth class came from St Joseph’s Boys NS and Rathkeale No 2 school and  from schools in Croagh, Ardagh, Shanagolden, Raheenagh and Newcastle West.

“We link with Mary Immaculate quite regularly on different educational initiatives,” Ms O’Donnell explained. One is National Science Week, something which the pupils love. The school also holds Engineering Workshops for Girls. As a girls’ only school from second class, it is about promoting the sciences at an early age, Ms O’Donnell said and they take part in the annual Science Blast for national schools.

Margarita Sheridan from second class loved her science session with Angela. “My favourite was when a girl got the clips out of the water.”

Her class mate, Áine Nix, thought Angela should have whirled the bucket with the water a lot harder. Sometimes when she tries it at home, she said,, the water skills.

Becoming a scientist would be “one of my many dream jobs”, declared another class mate Ella Greaney, But that is up there with astronaut, teacher and doctor. Meantime, she plans to search in shops for a windpipe so she can hear the sound of the wind.

The day didn’t capture everybody’s imagination though. Zara White decided she would have preferred to be reading a book. And not a science book!

We need scientists but yes, Zara, we need readers too.