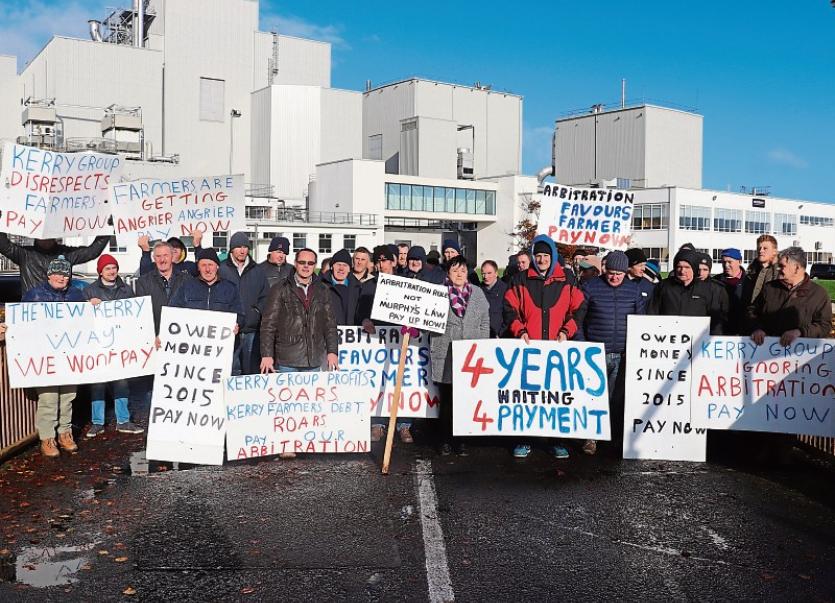 Farmers protesting the milk price in Charleville this week

THEY haven’t gone away, you know…

Protests outside Kerry Group moved from Tralee to Charleville this week. On Tuesday, over 60 farmers from counties Limerick, Kerry, Clare and Cork joined together for two hours.

The row centres over Kerry Group’s previous commitment to pay a “leading milk price” on a “like-for-like basis” that is in line with prices offered by other processors. It follows the conclusion on the arbitration process in early September which ruled in favour of milk suppliers.

It found that West Cork Co-ops have to be included in the leading milk price comparison calculation for 2015. Farmers argue it should be 2015 and subsequent years.

A Kerry Group spokesperson said they commenced a review and that the “review to date indicates no adjustment to the 2015 Kerry milk price payment”.

“Our review of 2015 milk prices paid by other processors and milk processors is very detailed and extensive to determine milk price on a ‘like-for-like basis’ bearing in mind subsidisation by some other co-ops from other significant sources of incomes outside milk,” said the spokesperson. A meeting has been confirmed with Kerry Co-op’s leading milk price committee on November 14.

“If the arbitration result on September 6 favoured Kerry then farmers would have no recourse. We want to remind management that farmers want implementation of the arbitration ruling. The outcome of Thursday’s meeting will determine whether it will escalate or not,” said Mr McCarthy.

Another to attend was ICMSA national dairy committee chairman, Gerald Quain, from Colmanswell. He raised the issue at last week’s Limerick ICMSA AGM in the Woodlands.

“I know that farmer-suppliers into Kerry are disappointed to note the continuing reluctance on the part of Kerry Group to finalise their position on the arbitration outcome entered into by both parties. In ICMSA’s opinion it is now essential that the leading milk price commitment is delivered in full for the outstanding years and payment made to the farmers as soon as possible. Kerry Group made a commitment to deliver the leading milk price to their farmer suppliers and this commitment must be delivered upon – in full,” said Mr Quain, to loud applause.

He continued: “There was a question mark about what formula would be used to arrive at the calculation of the leading milk price and the arbitration process has now clarified the issue and indicated that the West Cork Co-ops – who are, year-on-year, the highest paying Co-ops in the state – must be included in calculating what leading milk price is. That’s where the matter was left and it’s up to Kerry to make good on their commitment in a way that satisfies that formula of ‘leading milk price’.

“ICMSA thinks Kerry Group should communicate directly with their suppliers on this matter outlining clearly how they intend delivering on their ‘leading milk price’ commitment.”

The well-attended meeting heard that current market indicators showing increased markets prices being returned at wholesale level to the processors must be reflected in farmer milk price increases for October.

Mr Quain said he thought that Co-ops that did not meet the 31cpl minimum indicated by the market data would face “a serious backlash”.

As befits the overwhelmingly dairy focus Limerick ICMSA would profess, the bulk of the night’s contributions by president, Pat McCormack, Mr Quain and from the floor were concerned with milk price and the prospects for the dairy sector nationally and locally.

ICMSA believes that 31cpl is the minimum price that all milk purchasers must pay for October milk.

“Dairy markets have moved on significantly since the mid-summer lull and ICMSA has consistently argued over the last number of months that the current milk prices are demonstrably below where they should be. We’ve no doubt – and the data supports us – in stating that some Irish processors cut their milk price a good deal more than was justified by market returns and they will now have extra ground to make up in a situation where all Co-ops should be paying in excess of 31 cents per litre for October milk.

“Irish milk prices are now at the bottom of the European milk prices league with our three largest milk purchasers represented consistently at the wrong end of LTO European league and over €3 per 100kgs below the average price. Globally, we have seen Fonterra adjust their price upwards, and this was even before the latest rise of 3.7% in the Global Dairy Trade Auction. Global milk prices have increased steadily while Irish price have fallen or remained stagnant and this simply can’t continue,” said Mr Quain.