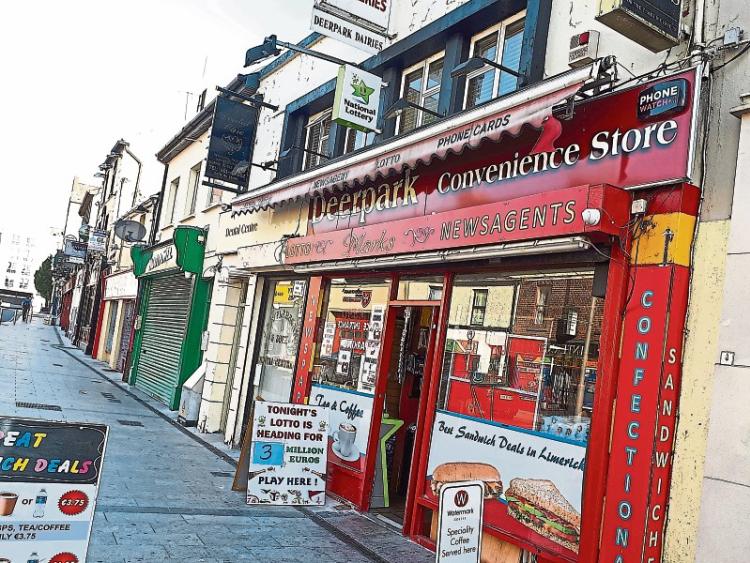 A DRUG addict who attempted to rob cash from a family-run shop in the city centre fled empty handed after the owner grabbed a mop to defend herself, a court has heard.

During a sentencing hearing, Limerick Circuit Court was told Trevor Wall, 30, who has an address at Woodvale, Foynes, brandished a large knife when he entered Deerpark Dairies, Davis Street, on January 17, 2018.

Garda Eoin Cleary said the accused – a father-of-one – entered the small store shortly before 11.30am and demanded cash from the register.

He had a knife with a ten-inch blade in his left hand while he used his right hand to cover his face.  He was also wearing a hoodie.

Garda Cleary told barrister John O’Sullivan, prosecuting, that Mr Wall “took flight” when a woman who was working at the store picked up a mop which was near the counter.

Having been alerted to the attempted robbery, the woman’s husband, followed the culprit and contacted gardai.

While Mr Wall was not apprehended on the day, he was identified on CCTV and was arrested a number of weeks later.

Garda Cleary said he made admissions telling gardai that everything was a blur as he had been on a three-day drugs binge.

”I can’t believe I done that. I was loaded,” he told gardai during interview.

Barrister Pat Barriscale asked the court to note that no injury was caused and that there was no financial loss to the shopkeeper.

He said his client, who has a number of previous convictions, is remorseful and that he wrote a letter of apology to the woman prior to the sentencing hearing.

Mr Barriscale said his client is now drug-free and “is in a much better state” than on the day of the offence.

”Robberies of this type are all too common,” he commented as he imposed a four-year prison sentence.