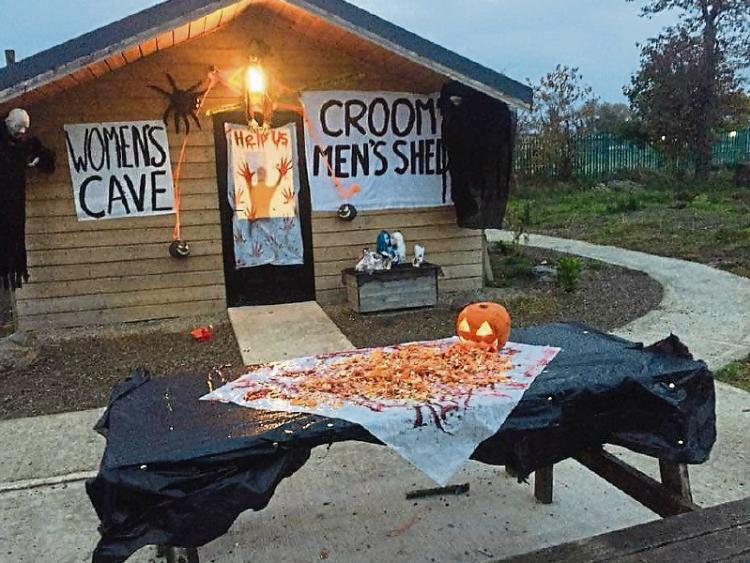 CROOM Women's Cave are proud, excited and a little frightened to announce the return of the Halloween Scare Tunnel this weekend.

You can go in but you might not come out...

The women's cave – a female version of the men’s shed – ran this event last year with Croom Family Resource Centre. Having now formed as an official group they have decided to run it again this year with encouragement and financial backing from Padraig Broderick, of Spar.

Eimear O Connor, chairperson of Croom Women's Cave, said last year's Halloween scare tunnel saw a group of ladies from the cave, their children and local teens, along with Laura Bennett from the resource centre transform the grounds of the local Scout den into a scare themed community event. Funds were also raised for Croom NS parents association.

“With help from the men’s shed a tunnel was erected. This was decorated fantastically thanks to props borrowed from a businessman from a nearby town, along with having adults and teens dressed in character inside for a scary atmosphere.

“The log cabin was fitted out for traditional Halloween games, arts and crafts and the main hall decorated for disco and karaoke where some very talented local children showed off their skills! The grounds were lit up with pumpkins and candle holders made by kids during the week at camp in the family resource centre,” said Eimear.

While the event is aimed at children aged 3 to 12, she says it is really for everyone. It takes place between 6pm and 8.30pm on Wednesday, October 30. They plan to walk from the park entrance to the Scout den in their Halloween costumes.

“It brings adults and teens together, volunteering their time and bringing yet another wonderful community event to the town showing the community spirit that is always alive here in Croom.  It is also a distraction for kids and teens during the Halloween holidays, gives them responsibility and a bit of craic for all ages when life can be quite serious at times.  With the support of the very enthusiastic Padraig Broderick, of Spar, and many local volunteers this event will also brighten up the whole street, decorate the town and have people dressed in costumes throughout,” said Eimear.

She asks: “Are you courageous enough to come and brave the scare tunnel, listen to the old witch's stories, walk through the haunted town of Croom? If so I'd advise you meet at the park entrance at 5.45pm maybe bring a little torch, dress in your scariest Halloween costume and make your way through the town up to the Family Resource Centre, Scout den on High Street and enter at your own risk. We will be waiting!!" Gates open at 6pm. All children must be accompanied by an adult.

Croom Women's Cave would like to thank all its members for their continued support and hard work.

“A huge thanks to Padraig and staff at Broderick's Spar not only for the financial support but for the encouragement shown to us as a group and thanks to all local teens and adults volunteers, staff at Croom FRC, 37th Croom Scouts and Croom Men's Shed, Declan Hehir, Bruff, Cllr Richard O Donoghue, Ashling of Croom Castles Balloon Art, anyone donating spot prizes for our raffle and to our family and friends,” said Eimear.