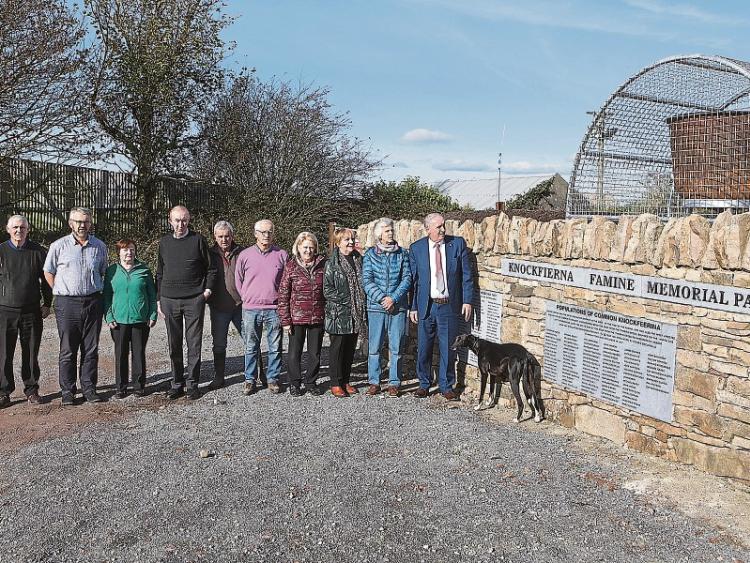 THE newly completed Knockfierna Famine Memorial Wall is a formidable affair. Built stone by stone from local sandstone, the wall curves for 100 feet on the narrow road into Knockfierna Hill overlooking Ballingarry, and its two dozen or so carved limestone insets recount for posterity the rich heritage and lore of Knockfierna Hill, as well as its more tragic past.

Here you can discover for yourself the magical lore of earlier days when Knockfierna Hill was reckoned a home for Donn Fírinne, the fairy king, and read the poems that tell of his twilight wanderings. Here too you can read the names of the many wildflowers that still find shelter on the Hill, along with foxes, hares, skylarks and meadow pippits. Here, carved in stone are depictions of ancient finds from the hill. And here too you will find unfolded the stark legacy of the Great Famine.

The names of all those families who had homes or land on the hill from 1830 onwards are also remembered on yet other plaques. “Some names have since disappeared from the area but many are still here,” Pat O’Donovan, chairman of the Knockfierna Heritage Society explained. One family name, the Greens, became the last family to live on the hill, he said, and Hannah Green, who died in 1964, was the last occupant of what is now the Rambling House.

“But the names of all the people will be remembered,” Mr O’Donovan said. Another inscribed slab of limestone tells the story of May 6, 1847 when a flag of distress was hoisted on a pole on Knockfierna Hill and some 1,000 people marched on Ballingarry, the numbers swelling to 2,000 along the way, demanding relief and work. A Famine Soup pot, a staple in every workhouse in Limerick, lies atop the Famine Wall.

“The idea for the wall was that it would be a place for the present generation of young people and for the generations to come and see the history and folklore of the place,” Mr O’Donovan said. “It is very unique wall and rare in Ireland and we are grateful to those who have supported our church gate collections and our calendars and made it possible.”

Over the past 30 years, Mr O’Donovan has spearheaded the development of Knockfierna Hill as a Famine Memorial Park, with its remains of Famine-era homes and potato ridges. Now the Hill has also become a favourite destination for walkers and runners who enjoy the 5km of trails and famine paths on the hill. And the Rambling House was one of the first to make its mark in Co Limerick.

This Sunday evening, a Hallowe’en Bonfire will be lighted on the hill at 6.30pm, with a free shuttle-bus service from Ballingarry from 4-5.30pm. Suitable footwear is advised. A Rambling House session will follow.