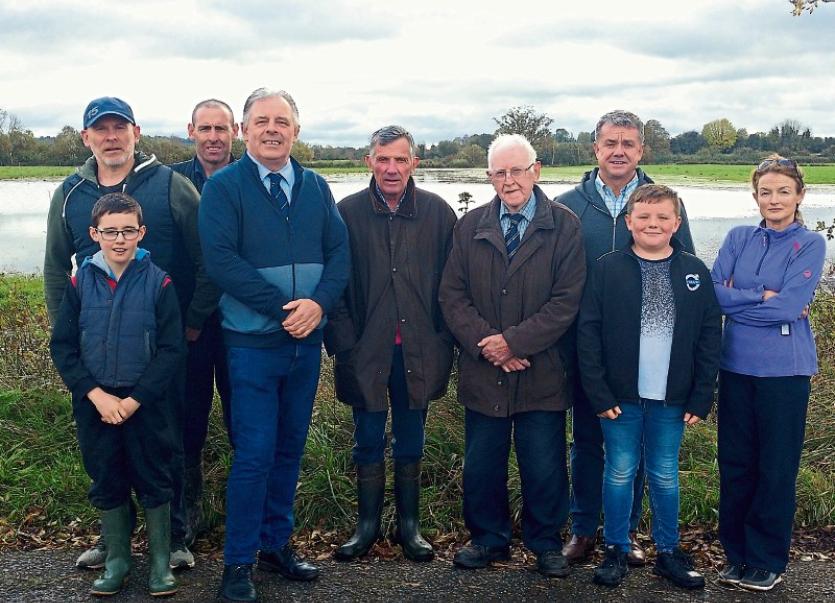 THERE is a danger that houses could be flooded at lower Annagh in Murroe unless works are carried urgently out declared Cllr John Egan.

The recent heavy rainfall since the start of the month has left up to five house at risk of being flooded with the road (L1122) outside under feet of water at peak times. Swans have been seen gliding along the road that was turned into a lake. Acres upon acres of farmland is submerged.

Cllrs John Egan and Martin Ryan tabled motions at the most recent meeting of the Cappamore-Kilmallock municipal district while Cllr Brigid Teefy put down a question.

Cllr Egan said since October 3 the flow of water is not getting into the river.

“There needs to be drainage work done on the watercourses. There is a danger that some of the houses might be flooded. We need to get the OPW to extend the area they control,” said Cllr Egan, who referred to Cllr Ryan’s motion which included a map of the locations.

“There is some blockage – the water is being held somewhere. We need to put pressure on the OPW to extend their responsibility and carry out works,” said  Cllr Egan, who has often seen the Mulcair rise and fall quickly but not water to stay in situ like this.

Cllr Teefy said it is an “emergency”.

“The road is blocked. They have to go all around to try to get to work and schools. Septic tanks have been affected. Houses are in danger of flooding. Cars were damaged, the road is damaged.

“There has to be a short-term solution. Residents are very concerned and we are facing into winter now. We are getting a huge amount of water,” said Cllr Teefy.

Darragh Corcoran, council engineer, said they were meeting landowners and there were plans to go in with a machine to alleviate the issue.

“If it is possible we will do it. It is severe enough,” said Mr Corcoran.

“Our outdoor staff were out until 2am the night of the heavy rain  dealing with issues in Doon, Effin, Cappamore to relieve flood waters. That is the value of our outdoor staff and they are thin on the ground. They have the local knowledge,” said Cllr Teefy.

Cathaoirleach Mike Donegan said they support both motions and question.

The council’s response to the motions and question is that they are engaging with local stakeholders in relation to the issue and are preparing an application for minor works to the OPW to carry out dredging of the existing channel between two benchmarks.

“Limerick City and County Council will also forward a request to the OPW to extend their remit to include the area in Annagh. However, it should also be noted that each landowner has responsibilities for the maintenance of drainage channels on their lands under the Arterial Drainage Act 1945 and the Roads Act 1993,” read the reply.

Cllr Egan said this is not Golden Vale land.

“Farmers are trying to eke out a living and it is hard enough do this at the moment without flooding on top of it,” said the Murroe-based councillor and local farmer.