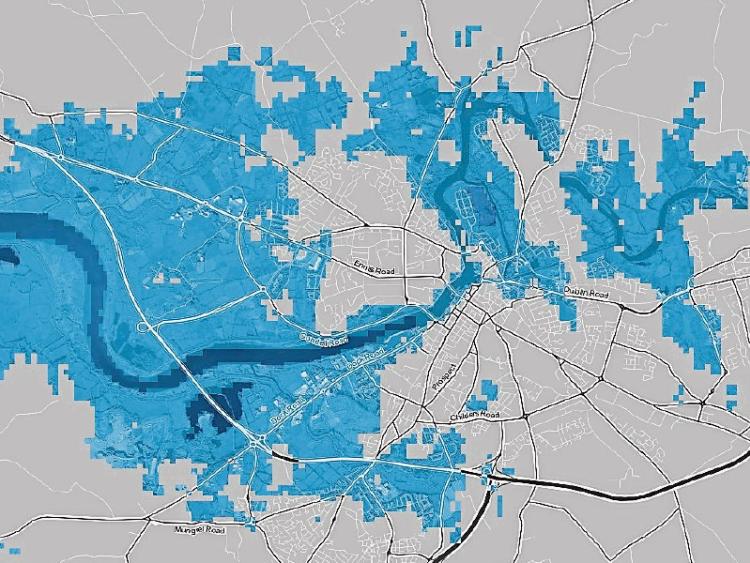 The dark blue line shows the river Shannon, the light blue areas are those projected to be under water by 2100

A RISE in the ocean temperatures could see large parts of Limerick City underwater by the year 2100.

This is according to an interactive map called Surging Seas, which is run by Climate Central, an independent organisation of scientists and journalists who research the changing climate.

The map claims to show that a two-degree rise in ocean temperatures could leave many areas of Limerick underwater. The map indicates that the entirety of the Dock Road would be submerged, along with large parts of Fr Russell Road. The map also indicates that Limerick Greyhound Stadium would be entirely underwater.

The map also claims to show that a two-degree rise in ocean temperatures would leave the Limerick Southern Ring Road, and its surrounding areas, completely submerged.

On the other side of the city, Arthurs Quay, Charlotte's Quay and parts of Georges Quay would all be underwater. As well as this, large parts of Clare Street and the entirety of Kings Island would also be lost to the rising river Shannon.

A four-degree rise in ocean temperatures could see Limerick city have a completely different layout, with the waters rising to as far up as O’Connell Street in some parts.

Henry Street would be nearly completely submerged, if the map is correct, including the Henry Street Garda Station.

However, these rising sea levels will not happen until 2100, and perhaps not for centuries after, a spokesperson for Climate Central has claimed.

“It's critically important to point out that the projected sea levels won't be reached until sometime after 2100, possibly centuries afterward. But the expansion of oceans caused by warming and the contribution from melting ice at the poles, among other factors, is expected to eventually raise sea levels to the estimates shown, depending on the threshold reached by 2100,” said the spokesperson.

“Climate Central is independent, non-partisan, and non-advocacy. We don't back politicians, policies, or solutions. Instead, we provide facts and analysis to help the public and decision-makers use reliable science to shape their understanding of climate change. Climate Central was founded in 2009 and is headquartered in Princeton, New Jersey.”

“We have a tidal river flowing through the city, we should remember that. If the water rises by just one meter, we could be in trouble.”