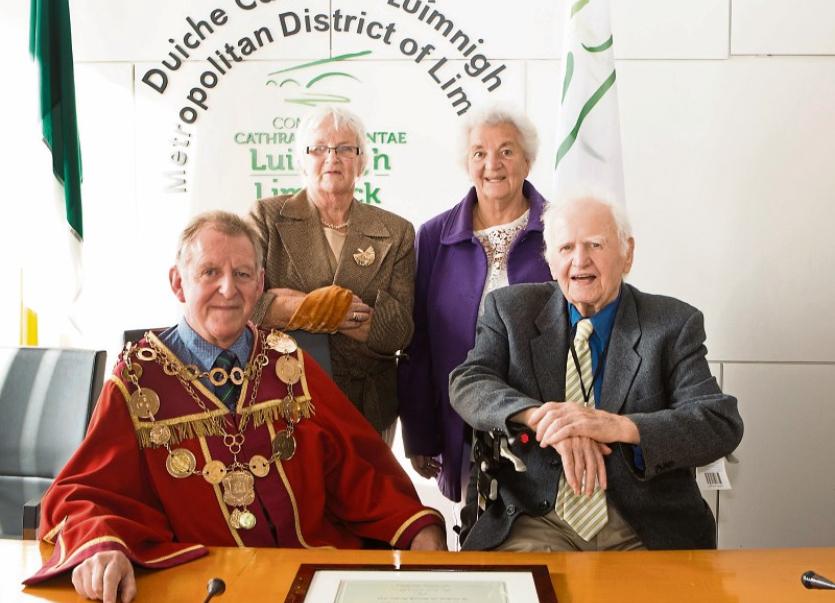 A MAYORAL reception was held to honour three of Limerick’s legends of literature, Maureen Sparling, Malachy McCourt, and Mae Leonard

Councillor Michael Sheahan, Mayor of the City and County of Limerick held the reception on Wednesday, October 16 last.

Cllr Sheahan honoured Mae Leonard in recognition of her achievements as one of RTE’s Sunday Miscellany’s best-loved contributors.

Ms Leonard has, through her writing as a poet and folklorist, continued to share with the nation her knowledge and memory of all things Limerick.

Read also: Thousand years of history at Limerick church waiting to be told

She has had several books published, including a poetry collection and has also won many literary awards, including the Cecil Day-Lewis and the Gerard Manley Hopkins awards.

Maureen (Ryan) Sparling, a lifelong friend of Ms Leonard, was honoured in recognition of her versatility as an author, as a novelist, short story writer and as a poet.

Her work has kept the literary tradition of the ‘Parish’ alive.

She is described as being one of the most well-known faces in the Limerick arts community and has written the St Mary’s parish notes for the Limerick Leader for many years.

“It was a brilliant day, beyond all three of our expectations. We were totally overwhelmed and delightfully surprised. A beautiful touch was, in the end, four men from the Men's Shed stood up and sung a beautiful rendition of There is an Isle. It was lovely,” said Ms Sparling.

“We were each given a large framed citation, which was beautifully written,” she added.

Malachy McCourt was honoured in recognition of his unique contribution and the contribution of the McCourt family to the telling of Limerick's story around the world.

The younger brother of author Frank McCourt, Malachy is well known for his own personal story as an artist, activist, broadcaster, actor, and as a gentleman of Ireland and New York.

He also ran for governor in New York State in 2006, as a Green Party candidate.