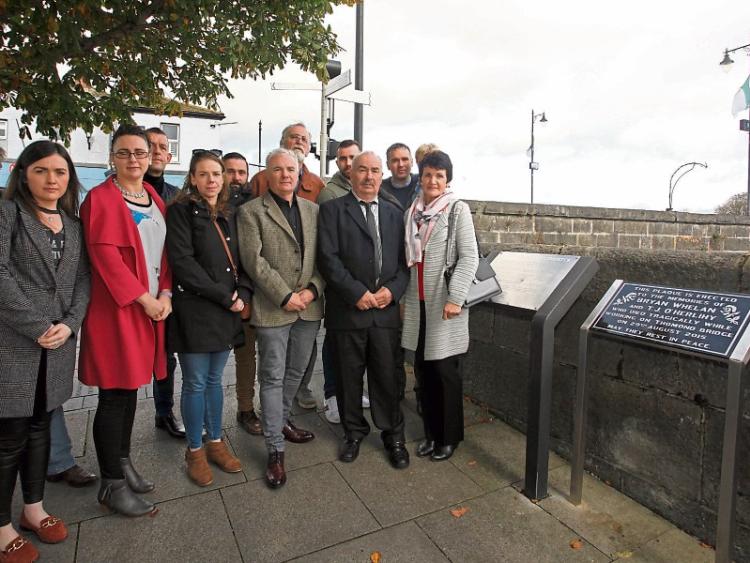 Family members of the deceased men and public representatives at the plaque in honour of Bryan Whelan and TJ O'Herlihy PICTURE: Brendan Gleeson

THE MEMORY of two young men who lost their lives in a workplace accident was immortalised with the unveiling of a special plaque at Thomond Bridge, where the tragic incident took place four years ago.

Bryan Whelan, 29 and TJ O’Herlihy, 36, died while carrying out maintenance work on the bridge on August 29, 2015, when the cage they were suspended from fell from its crane into the Shannon.

Family members of the two men and community members gathered at Saint Munchin’s Church on Sunday, October 13, where the plaque was unveiled by the bridge after a Mass.

“It’s fantastic that there’s finally recognition there for Bryan and TJ and that they actually lost their lives while doing their work,” said the family of Bryan Whelan.

“Though four years later, it’s still there, and it will always be there - they’ll never be forgotten.

“It was needed, to be marked,” said Robert Whelan, Bryan’s brother, “they deserved it, it’s the least they deserve.”

Sinn Féin TD Maurice Quinlivan said: “I’m delighted for the families to be honest, the families looked for this shortly after the incident.

“I’m disappointed it took this long,” he said. “I tried for it when I was in the council, and the process continued on after that.

“I remember myself the trauma in the city at the time,” he continued. “These men came to do work on the bridge, left their homes that day telling their wives and partners they’d be back and then didn’t return.

“They died doing work for the council, so it’s important that it’s there.”

“I was here that particular day and it still sticks in my head,” he explained. “They were making the bridge safer for us to use, and they paid for it with their lives.”

Last month it was revealed that two companies will face criminal prosecution as a result of the fatal accident.