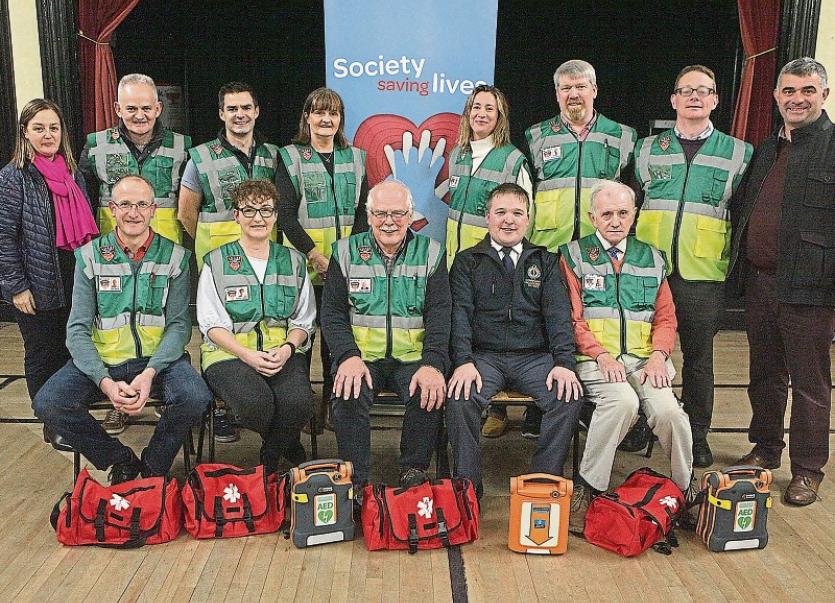 ADARE has become the seventh community in Limerick and the 250th nationwide, to have a dedicated, volunteer-led First Responders team.

The team went ‘live’ at the end of September but was officially launched this Monday in the Village Hall Adare.

“I know the amount of work ye have put in to get here,” Mark Callanan, community engagement officer with the National Ambulance Service said when he launched the service. And he reminded the newly fledged volunteers not to underestimate the power of their hi-viz jackets when called to an emergency.

They help calm the situation, and can mean the world to the families involved, he explained.

Meanwhile, the Adare team has, as one of its volunteers, the Medical Director of the National Ambulance Service, Dr Cathal O’Donnell who acknowledged he had learnt a lot through his training as a volunteer responder.  “It has been an education,” he told his fellow volunteers. And he paid tribute to those volunteers for giving up family time to do something selfless for their community.

“Unlike some of the other voluntary groups, maybe it is a bit invisible and people may take it for granted, until something awful happens.”

The push to develop an Adare First Responders began in May last year, its first chairman Kevin Cribben explained.

Read also: Limerick's Greg gets behind good cause in memory of late gran

“While we are very close to the ambulances in the Regional Hospital, about 15 minutes away with a blue light, you only get 10 minutes when you have a cardiac arrest,” he said, explaining the reasons behind the development.

“There are defibrillators available in the village but they are not accessible as they are in hotels, in clubs or in the Manor Fields and not necessarily available to the general  public in an emergency.

“While there are quite a few people trained in use of defibrillators we felt there needed to be a more organised response,” Kevin continued.

Some 20 people, including former TD Dan Neville, responded to the call for volunteers.

“We still do ongoing training for particular scenarios.”

The team is trained to respond to four situations, Kevin and Sharon explained:  cardiac arrest, chest pains, stroke and choking. But the first step in any of these emergency situations is to ring 112 or 999 and ask for the ambulance service.

The National Ambulance Service will then notify the First Responders through a dedicated phone and each member on call receives a message. The person or persons closest to the emergency who is available then responds and stays with the person until the ambulance arrives.

“Everybody should have their eircode to hand or memorise it,” Kevin added.

The Adare team has its own defibrillators and the cost of training and equipment came to about €6000, Kevin explained. “We are very grateful to the Adare Rathkeale councillors for the money they gave us to  get started. We also got a lot of generous donations,” he added.

The First Responders Group is a 24/7 operation with people rostered to be on call. Happily, although it has been up and running for a few weeks, there have been no call-outs.