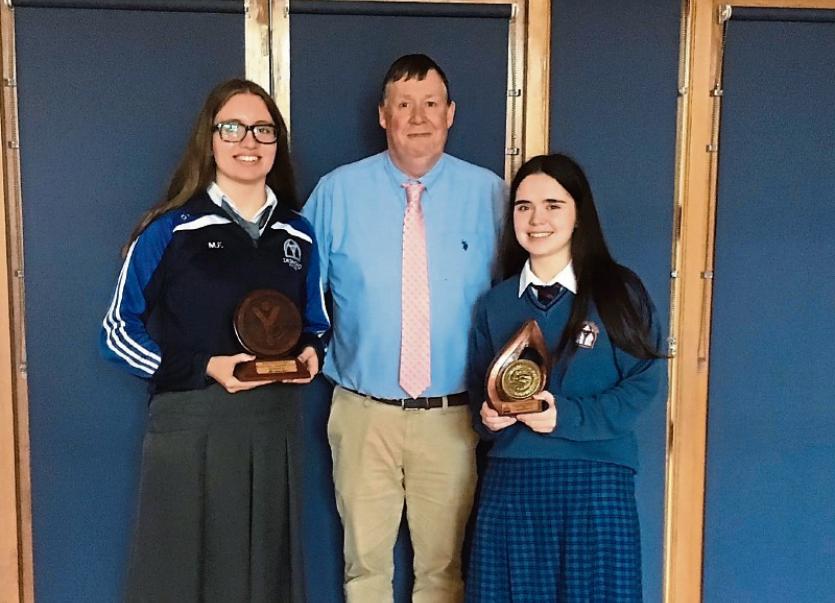 TWO students from Desmond College, Newcastle West flew to New York this week to take on students from the US and from around the world in an international entrepreneurship competition.

The two students, Melissa Flaherty of Newcastle West, and Ciara Brouder, Ardagh, are representing Ireland in the global finals of the National Framework for Teaching Entrepreneurship, which is organised by Foróige in Ireland.

The are showcasing their enterprise project - a safety harness attachment. The girls  worked on the harness while in Transition Year when they were mentored by their enterprise teacher Donal Enright. The project involved a simple device that is attached to any standard safety harness, which can be used to eliminate suspension trauma, which is the build up of lactic acid in a person’s  legs arising from being suspended in a safety harness for more than a few minutes.

The universal safety harness attachment was designed to help  combat this phenomenon. It can be easily deployed in the case of an arrested fall and used to relieve pressure from the worker’s legs and chest, ensuring that their blood flow is not restricted and decreasing the risk of fainting and cardiac arrest, both of which can severely impair the worker’s rescue.

The safety attachment is a simple but effective ergonomically placed device that can be activated using one hand movement.

It is constructed of lightweight aluminium and uses a strap designed for use in mountaineering along with a carabiner that can be attached/ detached from the fixation point on the front of any standard safety harness.

The girls entered and won  the regional rounds of NFTE enterprise competition last May  and then made a successful pitch to represent Ireland in the Global Final.

This week, they flew out to New York where they will compete against 25 teams from across the USA, and teams from Korea, Germany, Israel, China, India, Singapore and  Mexico.