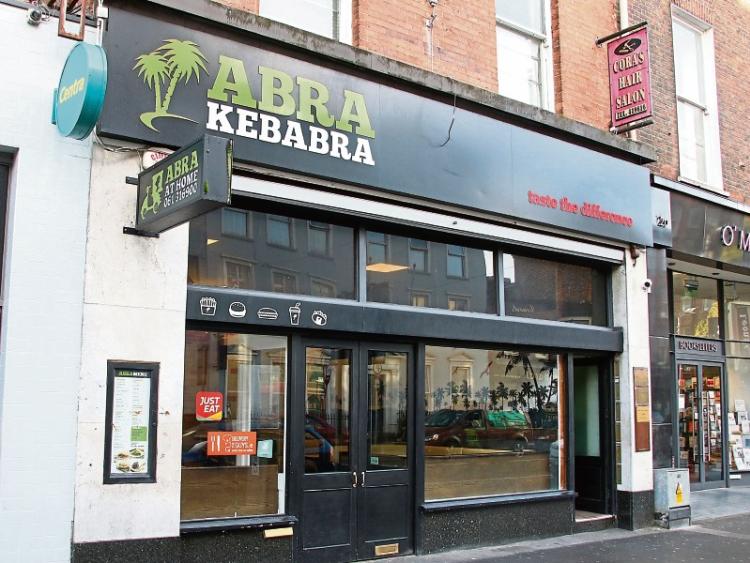 Customer and worker required medical attention after assaults at Abrakebabra

A BOUNCER from Chicken Hut helped defuse a violent row at another fast food restaurant in the city centre in a matter of seconds a court has heard.

Thomas Hehir, 41, of Deer Court, John Carew Park, Southill has pleaded guilty to assault charges relating to an incident at Abrakebabra, O’Connell Street, in the early hours of September 5, 2018.

Sergeant Michelle Leahy told Limerick District Court a customer sustained a broken nose during the incident while a member of staff sustained a number of lacerations.

Medical reports and photographs of the injuries sustained by the two men were submitted to the court after the defendant indicated his guilty plea to the charges.

Solicitor Sarah Ryan said CCTV footage from Abrakebabra which was disclosed to her shows her client interacting with another customer while ordering food at the counter.

She said there was no sign of a dispute initially but that an altercation takes place a number of minutes later after her client appears to respond to something that was said.

Judge Marian O’Leary was told the initial altercation involved Mr Hehir and another customer and that a member of staff can then be seen attempting to separate them.

Ms Ryan said her client accepts he “threw a kick” at the customer after he was knocked to the ground but that he did not make contact with his foot.

“It is difficult to see what happened” she said submitting her client did not intentionally assault the member of staff who was “knicked” as he intervened in the initial incident.

Ms Ryan said her client left the area for a short time and that the dispute can be seen to resume when he returns.

Mr Hehir and the customer then continue to grapple as the row moves outside the premises and onto the street.

The court was told the dispute was broken up by a bouncer from the nearby Chicken Hut premises who intervened after he was alerted to the incident.

“In three seconds he stopped it – the argument was over,” said Ms Ryan.

Having accepted jurisdiction, Judge O’Leary adjourned the matter to next week for sentence.

In the meantime, gardai are to inquire if the injured parties wish to make victim impact statement.