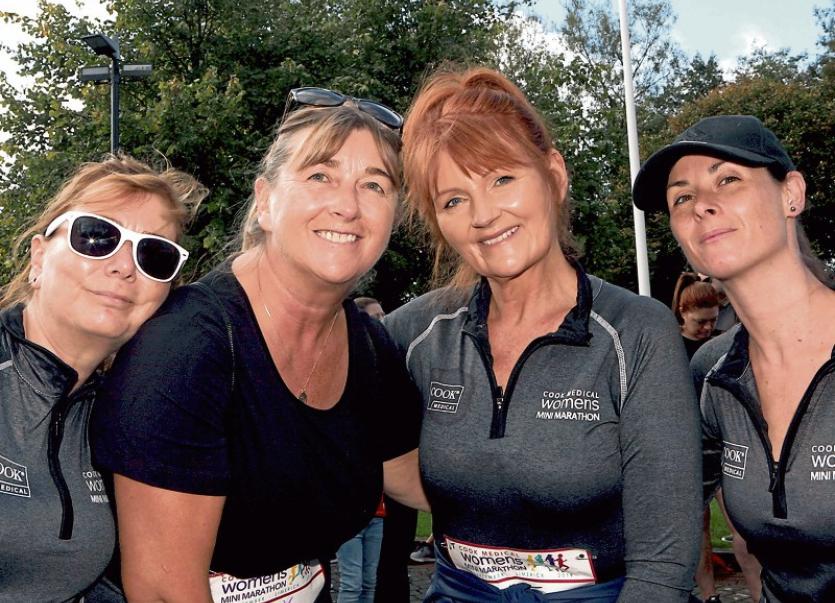 THOUSANDS of euro has been raised for local charities following the Limerick Women’s Mini Marathon.

More than 3,000 people ran for personal gain, and causes close to their heart at the Cook Medical sponsored event in the University Sports Arena, raising valuable funds for various charitis.

They braved horribly changing weather conditions in Castletroy, which saw it bright one minute and lashing with rain the next.

While the event is for women, many men in drag took part.

One of them was ​David Neil, Downey Street, wearing a fabulous get-up, running for the Irish Kidney Association.

“It’s for my brother-in-law. He passed away and donated his organs,” David told The Leader.

Angela O’Sullivan, Corbally, took part in the race three years to the day her husband died.

”We decided we wanted to do something positive. Myself and my two daughters Jenny and Danielle. All our family and friends, we want to create awareness of organ donation,” he said.

Another lady from Corbally, Michelle McNulty, joined her friend Margaret Clohessy in running for the Limerick Red Cross.

“We are trying to raise funds and build up its profile around the city,” she explained.

Margaret added: “We volunteer with this organisation, so this is part of our training.”

Asked how much training they had done, Margaret laughed and admitted: “not a lot”.

“It’s not about the training for us though. It’s about the participation,” she added.

Also running for a good cause was Senator Maria Byrne from O’Connell Avenue.

She was supporting her friend and Fine Gael colleague Cllr Sarah Kiely, who is fundraising for the Pregnancy Loss Comfort Fund.

“It’s great to see so many people here today. It’s started raining, but people are out showing their support for the cause,” Ms Byrne said.

Race director John Cleary said: “The mini-marathon is a great opportunity for women to get involved in the local community, and it’s encouraging to see so many women active.”