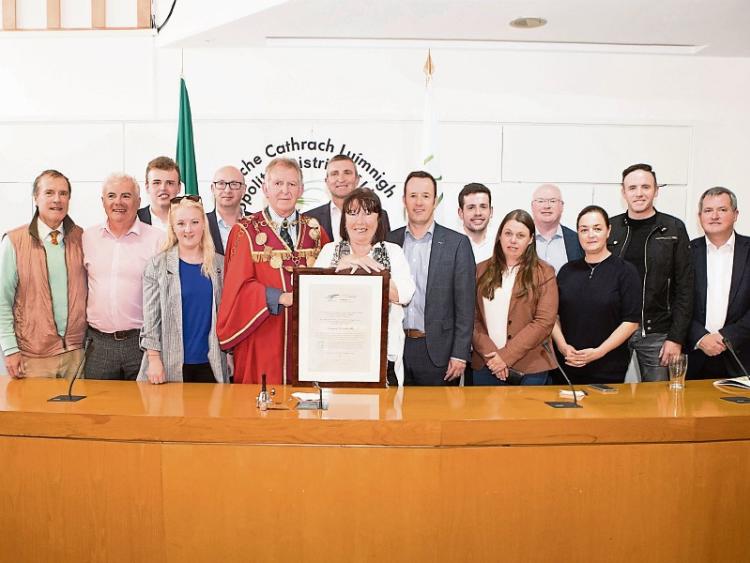 LIMERICK Leader stalwart, and lifelong trade union activist Norma Prendiville has been afforded one of the city’s highest honours.

Friends, family and colleagues of the Loughill East woman were at City Hall for a reception from Mayor Michael Sheahan.

It was held to honour her almost three decades at this newspaper, plus her contribution to the National Union of Journalists (NUJ).

Ms Prendiville is currently the Limerick Leader’s correspondent for the West Limerick area, and has also held a number of other positions in this newspaper, including news editor.

Addressing a packed chamber, Ms Prendiville said she was “deeply honoured” to accept the recognition from Mayor Sheahan.

“I have been to loads of things like this, and people talk of being humbled. You kind of think – they have to say that. But actually when you are standing where I am now, there is no other word for it. I feel very proud, and very humbled.”

On the same day as thousands of youngsters staged a climate strike in the city, Norma revealed she herself started a school strike when she was 16.

“My belief in the whole notion of collective action started early. We avoided what we didn’t want, but we forgot to ask for what we really wanted. So it was a good first lesson,” she laughed.

Norma said in the course of her role, she comes across some of the most “inspired people who do the most amazing things”.

“Journalism isn’t always about the hard news stories, even though they are exciting. Local journalism does go to the heart of the matter. You come across the most inspired people who do the most amazing things. It happens week in week out. It’s one of the really nice parts of the job that I do,” she added.

Norma was described by Seamus Dooley, the Irish secretary of the NUJ as having a great sense of social solidarity in her work and trade union activism.

Earlier this year, she hosted a vigil in the wake of the tragic slaying of journalist Lyra McKee, bringing journalists from across the region together.

“I’m very conscious here in Ireland that journalism isn’t always easy. In the course of my membership of the NUJ, two people have been murdered – Martin O’Hagan in Belfast and Lyra McKee in Derry.

“I’m honoured at what’s been done here this evening. It’s something I will remember and cherish, but in doing so, I’d like to also remember those who have died in the name of truth and justice.”

Among the Limerick politicians present were Deputies Niall Collins and Tom Neville, plus Senators Paul Gavan and Kieran O’Donnell.

They were joined by a number of councillors including Newcastle West member, Cllr Michael Collins, while the NUJ was represented by Mr Dooley, and the current co-chairman of the IEC, Gerry Carson.

Limerick Leader editor Eugene Phelan, who could not be present, wrote a letter congratulating Norma.

It read: “We are so fortunate to have Norma working for us for all those years.

“She could easily have got a job with any of the national papers but has made her home in West Limerick and gives great coverage to the different communities in the west. She is a wonderfully talented writer, who has a great sense of humour and is not afraid to tell you what is on her mind.”

Clare Champion journalist and Norma’s successor as chairman of the local branch of the NUJ Carol Byrne said it was Norma she who gave her her first flavour of trade unionism.

“Norma has been a tower of strength to so many journalists over the years in fighting for workers’ rights and entitlements and ensuring conditions have not been eroded.

“It has been a very challenging road for the media industry and those battles have always been hard fought. Even when many in the industry felt those battles were already lost, Norma would never let the side down and would fight on regardless,” she said.