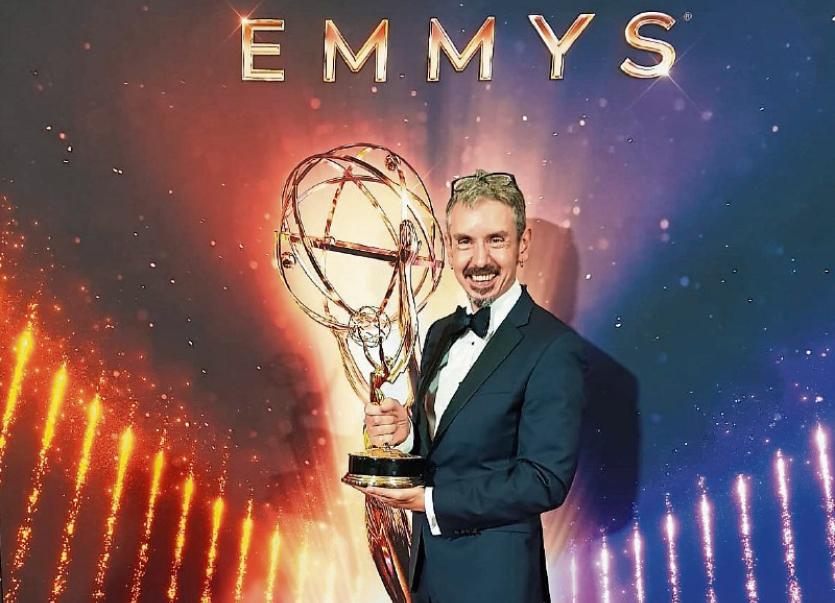 A TOP special effects guru, who grew up in County Limerick, has scooped the most coveted prize in the television industry for his artistic touch on hit HBO show, Chernobyl.

Max Dennison, 49, who grew up in Kildimo and attended Villers on North Circular Road, took home the outstanding special visual effects in a supporting role for the hit TV show that captured the fallout of the Chernobyl nuclear disaster.

Max, who was the overall visual special effects supervisor for the multi-Emmy-winning project, said he and his team are “tickled pink” with the honour.

“You are never quite sure until the moment they open the envelope, but we’re absolutely thrilled. It was a huge achievement, and to be recognised by your peers like this, is a huge accomplishment.

The artist’s journey to film success started in his home area in 1988, when Neil Jordan was filming the fantasy-comedy High Spirits at Dromore Castle in Pallaskenry.

Teenager Max observed the production with the unit publicist, who introduced him to the talented crew.

There he met renowned set designer Derek Meddings, who owned Meddings Magic Camera, where Max landed his first job in special effects in 1996.

In this Surrey studio, he specialised in matte painting, the art of composing various background illustrations and superimposing one over another, particularly where the imagery cannot be filmed or where there is an “impractical environment”.

Max’s career calling card came just four years later, when he was tasked with being the head of the matte painting department for Peter Jackson’s Lord of the Rings trilogy.

Max, essentially, was one of the top creative forces behind Middle Earth and Mordor.

“It’s nice to know that you were a part of that process, and part of the original team.”

Max is now one of the visual effects supervisors in the TV department at DNEG, one of the world’s largest visual effect houses, comprising 1,000 people at five intercontinental locations.

Through DNEG, Max was tasked with providing more than 850 special visual effects for the HBO mini-series, starring Jared Harris, Stellen Skasgard, Emily Watson and many more.

He said that they had a “duty of care to make sure what we were showing was close to reality as possible”.

One of the biggest challenges was recreating the obliterated RBMK Reactor 4 that exploded at Ground Zero, later rendering the nearby city of Pripyat a ghost town.

“We were afforded an incredible opportunity to film at a decommissioned nuclear power station in the northeastern border of Lithuania, a place called Ignalina,” he said, noting that this station was decommissioned after Lithuania joined the EU.

“It’s an exact model copy of the RBMK Reactor that was at Chernboyl. We had full access to film what was actually in the reactor hall, at the top of the reactor chamber, in and around the exterior. It immediately gives you a sense of place, of what the space is like. And they’re huge, they’re vast places.”

The additional challenge wasn’t just recreating the original Reactor 4; he and his team had to visualise Chernobyl in its post-exploded state. This included the visualisation of the reactor core, and even the grim blue glow that emanated from the open reactor in the first episode.

“What you see in the show is a lot of full CGI shots of Chernobyl, of the actual reactor, of the helicopters flying around a completely virtual environment.

“How could we tell the audience that these are real without them being obviously special effects. That was something that we did.”

Max wasn’t the only Limerick connection of the hit mini-series.

Jared Harris, son of Limerick acting legend Richard Harris, was the star of the show. Unfortunately for him, he was pipped to the post by 21-year-old Jharrel Jerome for the best actor award.

“I was very sad to see that him and Stellan [Skasgard] didn’t manage to get the Emmys this time around. I don’t think they could have done much more.”

Max, who loves coming home to his parents Jim and Valerie in Kildimo, said the ceremony in Los Angeles was a “surreal” experience.

Asked how the social element of the award ceremony was, he said: “Well, it’s different when you’re holding an Emmy!” he laughed, adding that he got an opportunity to meet with old friends and colleagues who were involved in other projects, such as Game of Thrones. “It was just a really fun night because everyone was just so pleased with what had been achieved, and our table was full of Emmy statuettes which was lovely, so we couldn’t have been happier.”

Max Dennison lives with his wife and his two children in London.