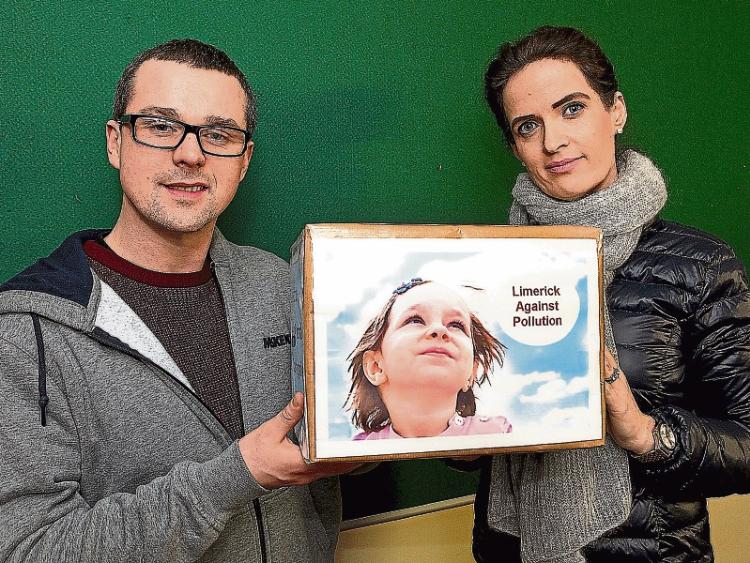 MUNGRET school children are to stage a lunchtime demonstration next week in protest at the environmental regulator’s decision to allow Irish Cement burn waste in the nearby factory.

There is anger across the city after the Environmental Protection Agency (EPA) approved plans by Irish Cement to switch away from fossil fuels in favour of solid recovered waste and used tyres.

Now, the children at the four schools in the locality are to stage a massive protest at Mungret Park, which is in the shadow of the Irish Cement kiln.

It gets under way from noon, next Wednesday, October 2, with letters going out this week to parents of children at the Mungret Educate Together School, Mungret Community College, the Raheen Gaelscoil and St Nessan’s School.

If the protest gets backing, it could see up to 1,000 students demonstrate.

It’s the idea of James Tuohy, a special education teacher at Mungret Educate Together National School, as well as his fellow staff members.

He said: “It sends a message that these children deserve to have a voice in these decisions, as do the teachers and the parents. We are not happy – we are outraged at what has happened.

While there are huge concerns at the impact the new practices will have on the environment, Irish Cement has always insisted that because the new materials are being burnt at such a high temperature, any effect will be negligible.

The students protest comes in the wake of the Fridays for Future climate change demonstration, which saw more than 1,000 pupils protest in the city – and millions more across the world.

Mr Tuohy – a member of Limerick Against Pollution – has stressed that because the protest is taking place during the lunch hour, children will not lose out on classroom time.

Meanwhile, the EPA has said it has “absolute discretion” to waive a €126 objection fee in some cases, in cases where it is satisfied that full payment of it “would not be just and reasonable”.

It comes following anger late last week after it emerged people who want to seek to challenge the licence awarded to Irish Cement would have to pay €126 to the government agency.

In response to a query from the Limerick Leader, the regulator said it is bound by the provisions of the Environmental Protection Agency Act of 1992.

Mr Tuohy believes the EPA should waive the fees here, given the groundswell of opposition to the Irish Cement plans, with 4,500 people initially objecting.

“The first thing is, it will be difficult for all these people to appeal with the fee. They reserve the right to waive that. In my own opinion, it is designed to stop people appealing,” he said.

Limerick Against Pollution, which is the main opposition lobby to Irish Cement’s plans will also hold a public protest march the following Saturday, October 5.

This begins from City Hall at Merchant’s Quay from 2pm.