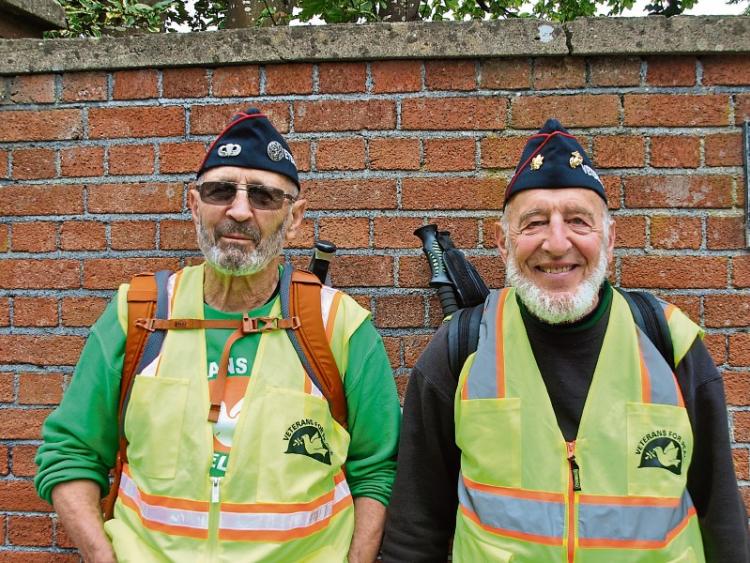 Ken Meyers, 82 and Tarak Kauff, 77, began their walk outside Limerick Prison, and will trek the length of the country to Malin Head in Co Donegal

TWO former members of the US military who began a peace walk in Limerick city last weekend are well on their way to Malin Head in County Donegal.

Ken Meyers, 82 and Tarak Kauff, 77, set out on their odyssey from outside Limerick Prison, where they had unfortunately spent some time in March and April.

They came to prominence when they entered Shannon Airport on St Patrick’s Day in a bid to search a US warplane. They were initially held in Limerick Prison for two weeks, then given bail.

However, almost six months on, Mr Meyers and Mr Kauff remain in Ireland as the state persists in its belief that  if the pair were allowed home they would not return for their trials.

“They are standing up for what is right in the world. The USA is waging war on the Middle East and using Shannon as a base to do that. It’s completely wrong.  These guys are heroes, they have a combined age of 150. It’s unbelievable they’ve been prevented from going home,” he said.

“These are people who are a very good age at this point, and they haven’t seen their loved ones in six months. It’s an incredible cruelty. And for what? For peacefully protesting about their use of Shannon. It’s appalling,” he added.

“They have every intention of appearing in court. They feel Ireland is selling itself down the river. These are two of the most decent blokes I’ve ever met in my whole life. They are two excellent men,” he added.

As it may take three years for their case to come to trial, the confiscation of the pair’s passports means they may end up celebrating their respective 85th and 80th birthdays in Ireland.

One of the men, Tarak, had just been married prior to St Patrick’s Day this year. It means he has been waiting for his honeymoon for six months.

Supporters of the pair on the walk were asked to take in the first 10km with the two men, who walked northwards to Galway before their first stopover.

You can donate to the men's cause here

Read also: IFA accused of not doing its job in wake of layoffs at Limerick meat processing plant