Inside the workshop of Limerick's real-life Mrs Claus 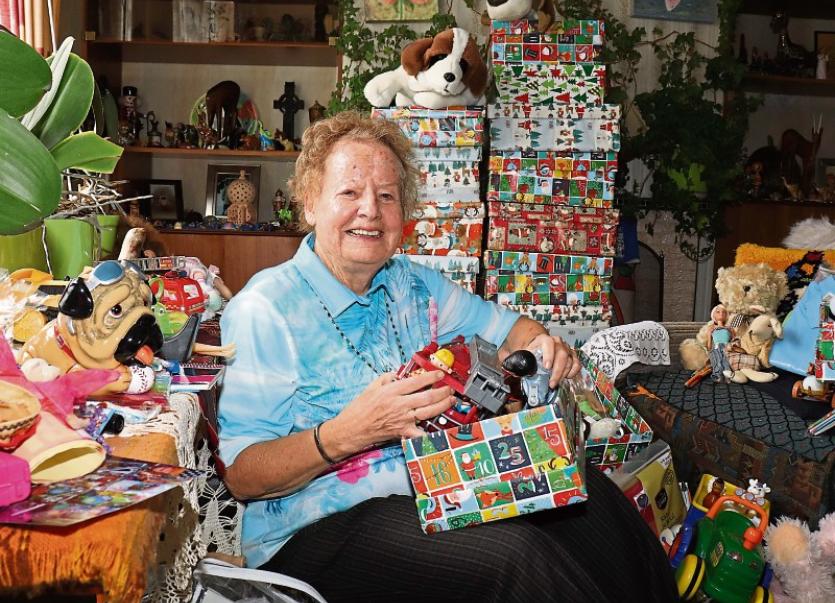 THE MURRIHY household in Caherdavin Park is akin to Santa’s workshop year-round, with the creation of hundreds of special Christmas gifts taking place on an almost daily basis.

Sigi Murrihy busies herself year on year with making up boxes for Team Hope’s Shoebox Appeal, which are given to children in developing regions of the world every Christmas.

“I’ve been doing it for about five or six years,” she said, as she stands in front of a stack of wrapped shoeboxes that reaches shoulder-height.

Around her lay boxes of toys, from teddies to figurines, all laid out in what she refers to as her “organised chaos”.

“When I was a child and I had to leave my house during the war with my mum, somebody gave me the present of a little doll,” Sigi, who is originally from Germany, explained, “and for me, that was like heaven.”

“One day, I was in a shop here in Limerick and I saw a doll in a shop looking at me, and I said ‘my God’, and that brought back the time when I was small.

“I thought ‘I could do something with that’ - and that’s when it started,” she added, “it started up very small with two boxes first and every year I had more - and last year I had over 200.”

Though her home workshop may be a one-woman show, Sigi receives help from friends and businesses for her shoebox efforts.

“I got donations from Germany, which I’m very delighted about. Actually, a doctor from Germany, Dr Friedrig from Freiburg gave me a donation,” she said.

“People here, when they hear about it are very good. A special thanks to my friends who collect toys for me, without them I couldn’t have it.”

Sigi also receives financial donations to add to the boxes from businesses such as Lidl, as each box requires a minimum donation of €4.

“I’m well-known in the charity shops here in Limerick, some give me things for a bit cheaper and some say ‘I’ve got that for you’ and others charge me full price, you have that you know.”

Sigi receives the boxes from Michael Gleeson’s shoe shop in Limerick city, and the boxes are wrapped by Carmel O’Brien and Mary Tuite.

“I sometimes wonder how I manage it, and I’m very lucky to have my husband,” Sigi said.

“Anybody else would throw me out altogether, and this year we are 55 years married - and we’re still together!”

Sigi starts her shoebox work in January, and this year she has made 147 boxes so far - with an overall goal of 199.

“One-hundred-and-ninety-nine has a nice ring to it, it sounds good.”

“It keeps me going, and it gave my life content,” she explained.

“It’s something, and every time I’ve a box full it gives me great satisfaction.”