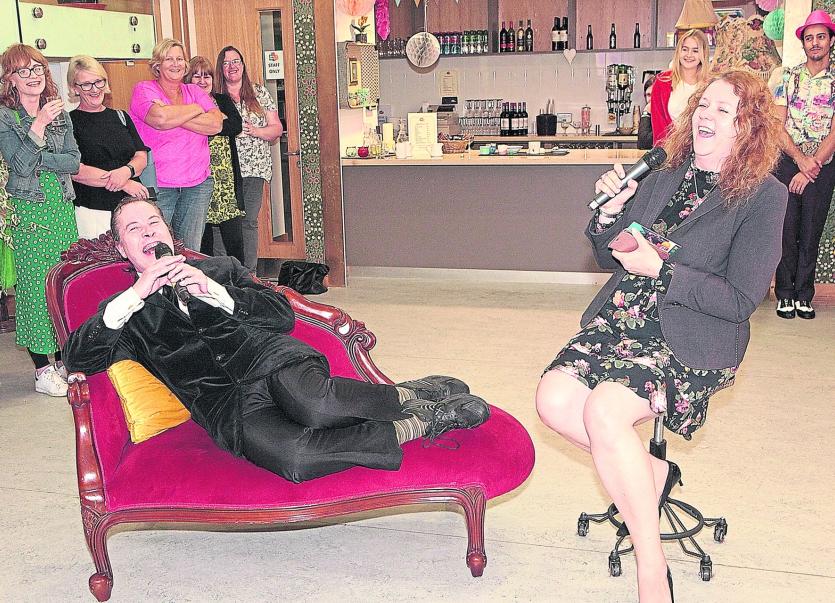 AS SUMMER season comes to a close, a spectacular line-up of cinema, theatre, opera, comedy and more arrives in Limerick city, as the Lime Tree Theatre and Belltable have announced their programme for the autumn and winter period.

Following a sensational summer, particularly with the return of Angela’s Ashes the musical, the two top venues are expected to attract large audiences with over 110 shows in the coming months.

At the launch in the Belltable, director Louise Donlon and Belltable programme manager Marketa Dowling spoke to some of the stars who discussed their upcoming shows from the comfort of a chaise lounge in the theatre foyer.

SEASONED thespian, writer and director Myles Breen is no stranger to our local stages, whether it’s through original or adapted works.
This time round, through Bottom Dog Theatre, Breen will be offering a bit of originality to the works of Irish literary legend Oscar Wilde, in A Wilde Fan, which takes place at the Belltable between November 7 and 9. Theatrically, as always, Myles discussed his vision of the unique winter show. At this week’s launch, Myles elaborated on the solo performance in his usual theatrical display.
“It’s not going to be a biography of Oscar Wilde; it’s more of a show about me and Oscar Wilde,” he said.
“We’re going to have some best hits and also my take on Oscar Wilde and what inspires me about him.”
Tickets for the show are on sale, ranging from €15 to €18, with the first preview show taking place on the Thursday. The award-winning Bottom Dog’s 15th production, Myles reunites with director Liam O’Brien for this must-see show.

As the Crowman flies, with Jon Kenny

LOUGH Gur comedian and actor, Jon Kenny, will bring his intimate one-man show, Crowman, to the Lime Tree Theatre this November, among many of the autumn-winter highlights in the new programme.
Playing many characters, Jon’s performance mainly surrounds Dan, a man in his 50s, who lives alone and later discovers he is not as much of an insider as he thinks he is. When he hears about the passing of a close friend, he is forced to look back on his troubled past.
“It’s a really good piece. I think it’s a piece that has a lot of value, from an audience point of view and from my own point of view. It has been very fulfilling. I know that the audience are going to come away and they’re really going to get something from it. And that’s what it is all about at the end of the day, you know?”
He said it is about belonging and loss and the ordinary things in life.
Crowman, by Katie Holly, will show for one night only on Saturday, November 2 at 8pm. Tickets are on sale from €20 and €22.
The Limerick comedian is known for his work with Pat Shortt in d’Unbelievables.

HOW TIME flies for the Cecilian Musical Society. And so will their milestone musical adaptation of Chitty Chitty Bang Bang, to mark 100 years in Limerick.
This show, which takes place at the Lime Tree Theatre in late November, also marks 50 years of the famous musical when it first hit the silver screen in 1968.
Speaking on the 100 successful years, Glen Carr said: “Trying to get people to give their time and share their talents, it’s not easy to get a group of people to contribute and give up their time. It has become a lot harder in recent years. As well as that, the standard has really been raised.”
Why Chitty Chitty Bang Bang? Jason Ronan says it was “very important” to pick a show that was iconic that would celebrate the society’s 100 years in Limerick. He said when they spoke to the rights company that they were also celebrating a huge milestone in their lifetime, “that really appealed to them to give us the rights for the show”.
”It was also important to us to do something that was family friendly.”

UNSURPRISINGLY, Fidget Feet Aerial Dance Theatre will be kicking of the autumn season with a bang with their quirky show Bingo Wings, which tells the story of bingo fever hitting the town of Ballydawn in 1974.
Everyone dreams of scooping the big jackpot, but the story hooks to lovers Jimmy and Moya who try rig the game. It’s a story about luck and love, and is inspired by artistic director Chantel McCormick’s childhood memories in Donegal.
“The show’s idea comes from my memory from going to the bingo in Castlefinn in Donegal with my granny and granddad. My granddad was the local postman who called the bingo game and so he was the celebrity, and I felt like such a celebrity going with my granny because she knew everybody. You weren’t allowed to play bingo at that young age but granny would give me the sheets, and if I won, she would take it from me really quickly,” she said, adding that she was her “lucky charm”. The show takes place on September 13 and 14.