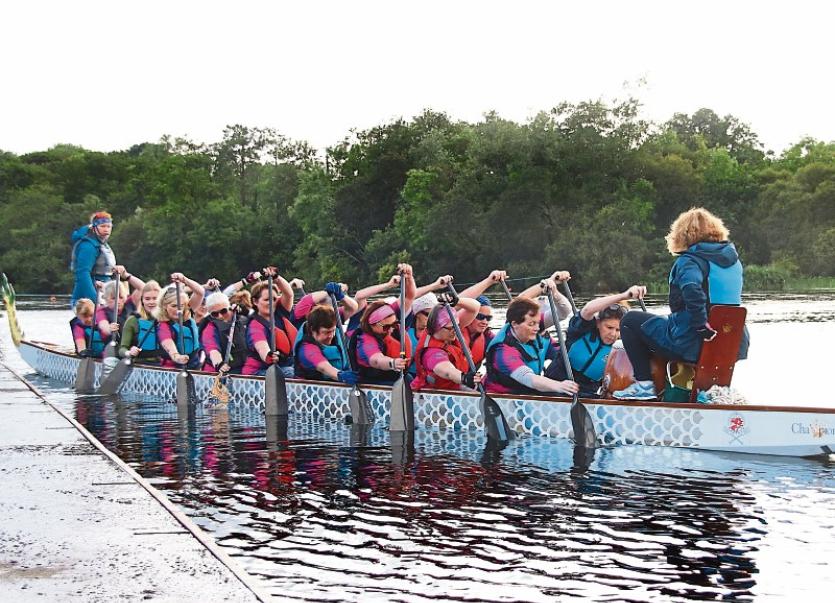 THREE TIMES a week, the sound of a booming, rhythmic drum bounces off the water of the River Shannon in Castleconnell, and the smooth surface of the water is sliced through effortlessly by a spectacular sight.

Above the sound of the drums and the splash of water off the paddles is the chatter of a group of very special women - brought together by chance and kept together by the bond they’ve created.

The Shannon Dragons is an apt name for the group; they are fearless, tough and graceful as they cut through the Shannon waters on their 40-foot long boat.

The club was formed in 2017 by Brid O’Connell, a breast cancer survivor who swears by the water’s powers in promoting recovery and restoring confidence - and she now leads a team of over 70 women who are just as passionate.

Based in O’Brien’s Bridge, a village on the banks of the beautiful Shannon, the club draws members from Limerick, Clare and Tipperary and is composed of women who have had breast cancer, and their friends and supporters.

“It is tough,” Bríd said, “Jessica O’Keefe, our trainer, really puts us through our paces.

“You start off enjoying being in the water and you just love the experience and you get fit almost as a byproduct.

“It takes you to a level of fitness that you never experienced before, and you never knew you had,” she laughed.

Bríd explains how the group were brought together by word of mouth, and how the groups acceptance and camaraderie keeps the team tight.

“When you see other people who kind of look like you out doing it, it makes you think ‘oh, maybe I can do this’. It removes the idea that this is for athletes or a younger population.

“The river is for everybody, and it’s another way to access it,” she added.

“We’re meeting in need, really, of socialisation. It’s lovely to see people at a certain stage in their lives when maybe the children have left home and you’re missing your community of fellow parents.”

The team have competed in multiple regattas across the country, going from strength to strength with each race.

“It’s pretty fast, the boat is manually propelled,” she added, “we’re not professional athletes, though some of us might like to aspire to that!”

Fellow club member Catherine Troy was referred to the club during her lymphedema treatment two years ago.

“I got in touch with Bríd and came out, put my buoyancy aid on and got out on the water and from that moment on I was hooked, and I’ve never looked back.

“It’s pure relaxation, I haven’t experienced anything like it before”, she added, “after a stressful day at work, family life and different things you just get out onto the water for a while and it’s great.”

“For me, I came from lymphedema services, and other women would have come from breast cancer treatment,” she said, “but when you come here, we’re all just a group of women who get together to take a boat out on the water.”

When another member, Mary O’Sullivan, was asked why she joined the club her answer was simple: “Bríd.”

“I was at a cancer fundraiser and I was going through treatment,” she explains, “I had no hair, no eyebrows, no anything and I had a necklace on.

“Brid looked at me, she didn’t mention my appearance and said ‘I love your necklace’ and that started the conversation.”

Mary admitted she was “hesitant” at first to get involved: “I have lymphodema and couldn’t lift my arm after surgery. I had physio and loads of procedures to try and be able to lift it up and Bríd said to come out, and that I could drum if I couldn’t lift my arm.

“I got on the boat and to this day, it’s the best thing I ever did,” she said, “there’s such wellness in that water.”

Fittingly, the club motto happens to be Wellness on the Water.

The club’s focus right now is on their upcoming Inter-Company Dragon Boat Race, which will take place this Sunday, September 1 at O’Briens Bridge boatclub.

“This kind of event has never been done in Limerick before,” said Bríd.

Twelve novice teams will battle it out on the water, including teams from Rusal Aughinish, Analog, Axa insurance, Britvic Ballygowan, Limerick City and County Council and Clare County Council.

“We’re delighted to have the Shannon Dragons using the waterways. We always felt that the river was underused really and having the SD here it’s brought a new energy to the village,” she said.

“Like most rural villages, we’ve been in decline so we hope the competition will help revitalise the area.

“Their whole philosophy is one that is advantageous to everyone, it’s great to see.”

The event, which kicks off at 1pm on Sunday September 1, promises to be a fun-filled day out for everyone with gripping, adrenaline-fuelled racing. ​