Community spirit of Limerick village goes on show on Nationwide 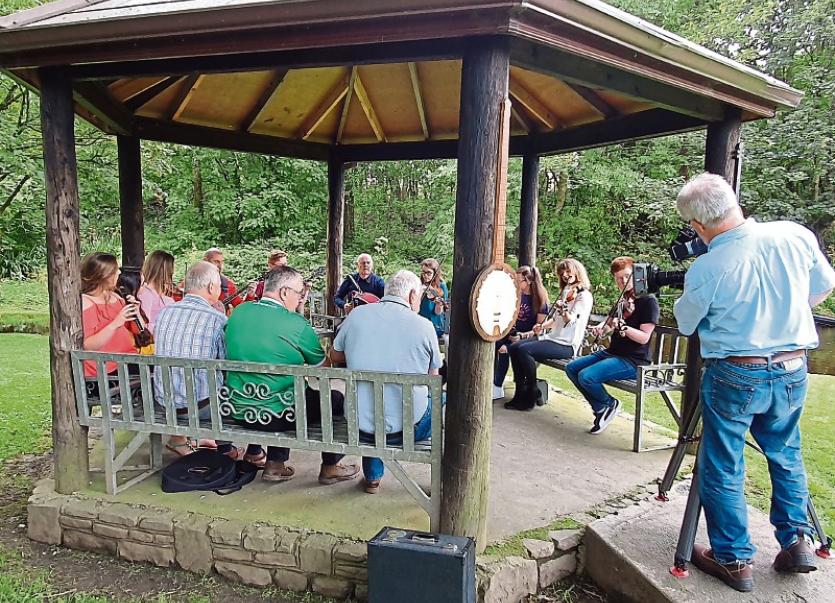 Gaiety by the Galey: The RTE cameraman captures a session by the river in Athea

ATHEA will get its 15 minutes of fame next month when the parish features in an RTE Nationwide programme on community activism and Tidy Towns activism in particular.

But last Saturday,just in time for the film crew, Athea got its day in the sun.

For days in advance, according to Damien Ahern, a stalwart of Athea Tidy Towns, there was a great buzz about the village with people out brushing, washing, painting, planting, and all ensuring Athea would look its best for the cameras.

It was, by any reckoning, a busy day of filming when all aspects and elements of community life and effort were showcased.

New residents, Jim and Liz Dunn who moved from the UK to settle in Athea and who have contributed hugely to their new community were quizzed about their move. Footage was taken of the Carnegie Library, which now features on one of four stamps marking the anniversary of the death of steel magnate and philanthropist Andrew Carnegie and which has been transformed into a community hub. The budding young guitarists who are one of several groups using the space on a weekly basis, demonstrated their skills while at the other end of the village, the GAA grounds buzzed with young hurlers and footballers.

The story of Athea’s famous giant, a quick scene from the Drama Group’s latest production, a whizz-past by the Athea Cycling Club, a soccer match all found a spot as did the Tidy Towns and some of their projects including a heritage trail and River Walk.

“The second last stop was 'Batt's Bar' where Lorcan McAuliffe and Rebecca Stampleton gave us a rendition of 'The Green Hills 'round Athea' in the presence of John O' Connell who turned 93 on the day and also present was 97 year old Hannah Scanlon looking as elegant as ever,” said Damien.

The provisional date for airing is Friday September 27th on RTE 1 at 7pm. “Athea will feature as a half slot in the programme for approximately 12 minutes,” Damien said, adding his hope that as much as possible of the action on the day will make the final cut.

But next week, he continued, there is another challenge for Athea.

“Following on from our success in last year's Going for Gold Competition, we are now entered into the 'Champion's Category' of the competition. Our village will be judged any day between September 2 and September 5 and most of all, the judges will be looking out for litter of any form.”