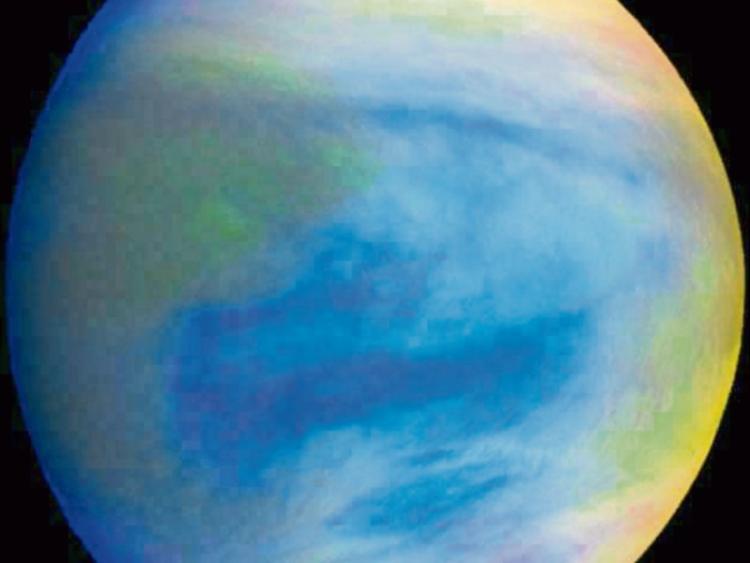 A casual observer might not know what it is, but if the western horizon is clear about a half hour after sunset, it is unmissable. That intense bright spark is not a plane, a satellite, or a UFO — it is our nearest planetary neighbour that can come within ten million miles of Earth.

Venus features in the folklore of many cultures: the Aztecs saw Venus as the fearsome god who ruled the midday sky, who could only be placated by human sacrifice. Ancient Indo-European cultures also associated Venus with natural and man-made disasters. We derive our Venusan myths and the name from the Romans, who were so impressed by its sparkle in the sky, that they called it after their goddess of love. Looking up at its intensely bright glint shining through the sun’s glow, it is easy to see why the Romans were charmed.

Venus was long regarded as our twin in the Solar System. Not only does it come closer to us than other planet, it is about the same size, only a little smaller. As details of the surface were hidden by dense cloud, people could only speculate on what, or who existed on its surface. Until the 1950s serious astronomers speculated that Venus had a climate range rather like Earth’s. The climate was expected to be warmer due to its greater proximity to the Sun and those clouds were thought to ensure planet-wide rainfall. However, the fate of the Russian Venera space probes, hinted at a very different reality: two of them were crushed by the enormous atmospheric pressure on the surface, which was measured at ninety times that on the Earth’s surface. The surface temperatures were much higher than expected: 500°C, enough to melt lead, hotter even than Mercury’s surface, which is closer to the Sun. Even the clouds, so bright from Earth, consist of sulphuric acid.

The intense heat and pressure is explained by the atmosphere, which is about 97% carbon dioxide, which is heavier than air and traps the Sun’s heat, causing a runaway greenhouse effect, a cautionary tale for planet Earth.

NASA’s Magellan mission to Venus has given us views of its surface in the unprecedented detail. Using radar to image the surface through its dense clouds, it uncovered a surface that is waterless, dotted with volcanic features, probably still active and huge mountain and upland areas. If you have time, then look these up.