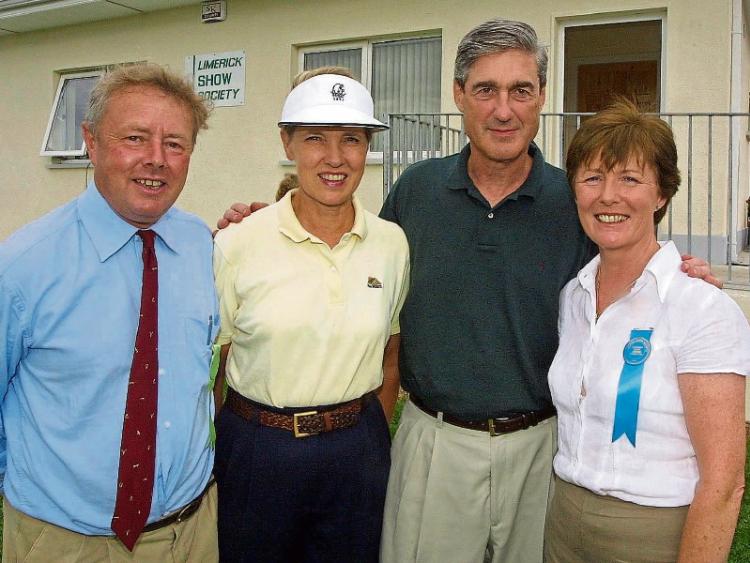 THIS isn’t fake news - the former director of the FBI and the man who investigated US President Donald Trump, Robert Mueller attended Limerick Show.

His wife Ann even presented prizes to the winners of a pony class in the showjumping section. The Limerick Leader reveals the story for the first time as it was kept top secret at the time.

Mr Mueller has made headlines globally since 2017 after he was appointed  to serve as special counsel for the United States Department of Justice. Mr Mueller oversaw the investigation into "any links and/or coordination between the Russian government and individuals associated with the campaign of President Donald Trump”.

Back in 2003, Dicky Power, then chairman and now president of Limerick Show, said the phone rang about 10am on Saturday morning.

“It was the Garda Special Branch. They said Mr Mueller was staying in Ireland, had seen the signs for the show and had expressed an interest in coming,” said Mr Power, who told them they would be delighted to welcome the director of the FBI. Mr Mueller served as the head of the organisation tasked with protecting the USA with an annual budget of around €9 billion and over 35,000 employees from 2001 to 2013.

The phone calls kept coming - Mr Mueller was two hours away, then an hour away, then 10 minutes. Normally it is Limousins that are brought to the show but three stretch limousines arrived into Limerick Racecourse around 3pm.

Mr and Mrs Mueller were met by Mr Power, from Grange, and Eithne Gleeson, chairperson of the showjumping committee from Ballybrown. The Muellers were accompanied by over 10 giant bodyguards, dressed in black and all mic’d up with earpieces.

“He drove over to the office. That’s where the photo was taken with Eithne and myself. We were a little bit younger in it,” smiled Mr Power. His wife Catherine captured the moment.

They then brought the Muellers down to the showjumping ring and made them comfortable in the mini marquee to watch the action.

Ms Gleeson said a competition was just finishing up.

She strained her neck to look up at one and said, “Excuse me, how do we refer to Mrs Mueller?”

“They had never spoken once. They were just staring, watching everything. He said, ‘Nothing. You can’t say a word. Don’t even mention she is here!’. Mrs Mueller presented the prizes in a pony competition,” said Mrs Gleeson.

Mr Power said Mr Mueller was very down to earth.

“He was a very pleasant guy, a lovely fellow. He didn’t act high powered but he was high powered. He is the heaviest of heavy hitters. We were chatting away, they didn’t know a lot about showjumping. I said, ‘Bob, would you care for a drink?’ He said, ‘No, I had a pint already today I couldn’t manage another one’. He had no Irish connections. They were staying in the Mustard Seed and he was playing golf. They were lovely,” recalled Mr Power.

The showjumping committee offered tea and fruitcake to their esteemed guests.

“A taster didn’t have to taste it first - they trusted us anyway,” laughed Mr Power.

After two hours the Muellers said their thank yous and goodbyes to Limerick Show but left great memories for Mr Power and Mrs Gleeson.

Since then they have been following the career of Mr Mueller and whenever he appears on TV they remember the day he and his wife called into Limerick Show.